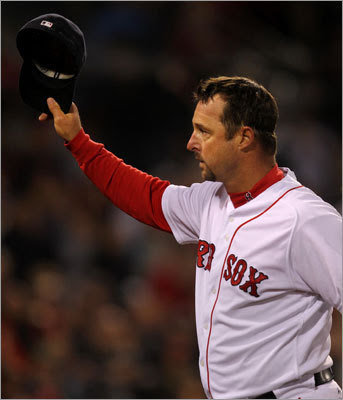 Tim Wakefield gave the Red Sox and their bullpen a shot in the arm last night, as he pitched 6 2/3 innings of solid ball, allowing just one run as the Sox took the series from the Cubs, 5-1.

But Wakefield was the story. Now the oldest player in baseball (and to ever wear a Red Sox uniform), he baffled the Cubs until the seventh inning, when he started to get hit hard. But it didn't tarnish a wonderful night for Wake, who picked up his 194th career win, and number 180 in a Red Sox uniform. He trails Cy Young and the Texas Con Man by 12 for the team record for wins.

The Sox have now won 8 of their last 9 and are 1/2 game behind New York and Tampa Bay. They start a seven-game road trip to Cleveland and Detroit tonight.

And some good news for you Nuf Ced McGreevy fans. A valuable photo of him that was stolen years ago from the Boston Public Library was recently found by an Iowa collector. Here's more from Hauls of Shame.
Posted by The Omnipotent Q at 11:31 AM