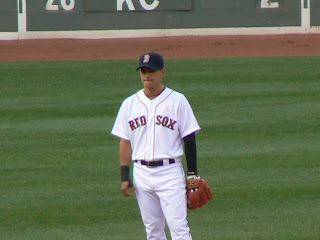 Another Mother's Day miracle you ask? Daisuke Matsuzaka allowed three runs in the first inning, and wound up a winning pitcher yesterday.

It looked like the Evil Dice-K was making an appearance on Sunday to upset all mothers out there, but the offense came to rescue, as the Red Sox cruised to a 9-5 win.

Adrian Gonzalez celebrated his 29th birthday with his new friend, the Green Monster, as he hit a home run over the wall and got two other hits in driving in two runs. Jacoby Ellsbury has now hit in 17 straight games and Carl Crawford continued his hot-hitting, as he's now hit in eight straight.

J.D. Drew and Jed Lowrie also drove in two runs apiece, and the Sox beat up on former Yankee great Carl Pavano. Jose Iglesias (pictured) made his MLB debut in the ninth inning, taking over at shortstop for Jed Lowrie, and retired the final batter on a grounder to him. My buddy Jere has a complete pictorial retrospective of the game yesterday over at his fine blog. (With thanks to him for this pic.)