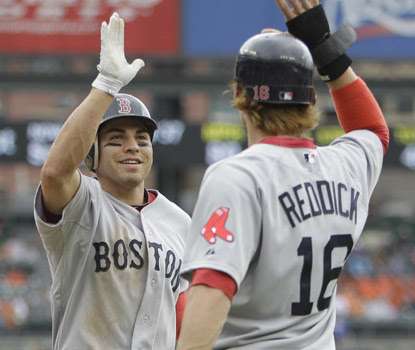 The Red Sox were doing it once again on Thursday afternoon in Detroit, as like on Wednesday against the Indians in Cleveland, they laid two touchdowns on the Tigers. 14-1.

Carl Crawford had his second straight four-hit game, had another triple and three RBI as the Red Sox scored five in the second on Max Scherzer and never looked back. Alfredo Aceves was very good, going six innings, allowing just the one run and struck out six. Not bad for a number 7 starter.

Jacoby Ellsbury blasted his fifth home run of 2011, and newly-called up Josh Reddick (Darnell McDonald went on the DL with a quad injury) had three hits and three RBI (and nice to see him wearing a more normal number now: 16).

The only thing I was afraid of was the weather calling the game before five innings. But the rain held off until the 8th and the game was called after 7 1/2 innings.

OK, technically the Red Sox aren't in first, as New York is two percentage points ahead. But the Sox have more wins then they do (28-27) and only the Indians (30) have more than the Red Sox right now in the AL.

And the Red Sox are NO games back right now.

Let the carnage continue.
Posted by The Omnipotent Q at 12:07 AM