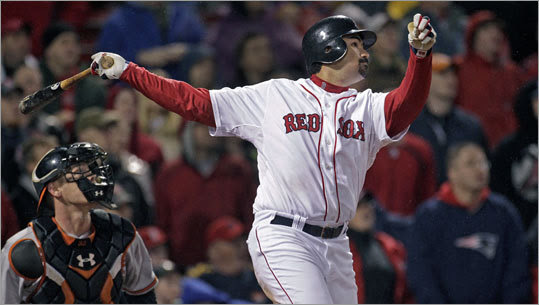 It looked like a tough night last night. We had Trivia Night on a rainy Monday night, and that meant the crowds at Professor Thom's would be down (and they were). After I finished preparing for the night, it was already 2-0 Orioles in the bottom of the first.

It didn't get any better. Terry Francona finally pulled the plug after he walked 7 in 4 1/3 innings. It was cold, it was raining, and it was 6-0 by the bottom of the sixth.

This looked like it was heading for the "L" column. After the great weekend sweep in New York, it looked like they would suffer a hangover against Baltimore.

But the Sox rallied for 5 in the 6th, but the Orioles got a run back in the 7th on Mark Reynolds' home run. The Sox wiped that out in the bottom of the inning on Jed Lowrie's triple and Jason Varitek's single.

It stayed 7-6 until the ninth, when with runners on first and second and one out, the hottest hitter on the planet, Adrian Gonzalez, stepped to the plate. You could feel this wouldn't end well for the O's.

And it didn't. Gonzo hit a high drive off his new best friend, the Green Monster, and both runs flew around to give the Red Sox a huge 8-7 win. A game they never had the lead until the final swing of the bat. Gonzalez had 3 RBI last night, and leads MLB with 37.

The Yankees blew another big lead last night at St. Pete, as the Rays came from 5-1 down to win, 6-5. Tampa Bay now has a three game lead over the Sox, New York and Toronto.

The Red Sox also decided to give John Lackey some time off, as he was placed on the DL before last night's game with an elbow strain. He's been going through some personal problems with his wife fighting cancer, so the time off may do him some good. Scott Atchison was recalled from Pawtucket last night and relieved Matsuzaka in the fifth inning.

Tim Wakefield gets the start tonight, should the weather cooperate.
Posted by The Omnipotent Q at 12:42 PM