"We Beat Him Before, and We Can Beat Him Again" 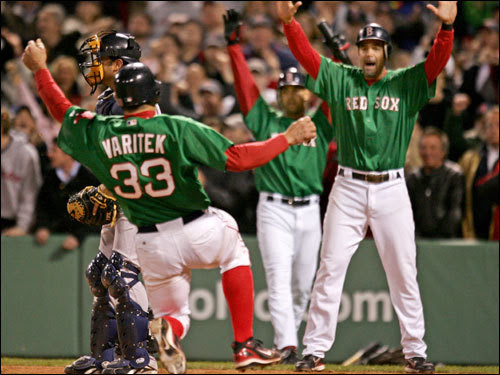 God, was that eighth inning beautiful.

I was at Professor Thom's last night, and there was a depression for a good part of last night's Red Sox-Yankees game, with Alex Rodriguez hitting two home runs off Curt Schilling. The offense looked rather sluggish most of the night, as they couldn't seem to get a clutch hit when they needed it most.

The Red Sox finally got it going in the 8th when David Ortiz doubled, Manny Ramirez walked, and Mike Lowell singled. It was 6-3, and Joe Torre brought in Mariano Rivera to try and get a five-out save. When Rivera was coming in, my buddy Eric reminded me of an immortal moment that none of us who were there will ever forget.

It was September 17, 2004, and Eric and I were at a packed Riviera Cafe watching the Red Sox and Yankees. It was 2-1 going into the ninth, and I remember Eric was depressed thinking the game was over because Rivera was coming in. I reminded Eric that the Sox beat Rivera the previous July 24 on Bill Mueller's homer. "He's not infallible," I said. "We beat him before, and we can beat him again."

And sure enough that night, the Sox scored two runs in the ninth and beat Rivera, 3-2. (That was the famous "catch the ball" line that Rivera called out to Kenny Lofton as he couldn't catch a Johnny Damon fly ball that brought in the winning run.) The Riviera went totally bananas that night, and it made me wonder , "God, what would this place be like if the Red Sox win the World Series?" (I would find out the answer exactly 40 days later.)

Rivera had nothing last night, as Jason Varitek singled, Coco Crisp tripled (why wasn't Doug Mientkiewicz guarding the line?) and Alex Cora singled over a drawn in infield (ah, the memories of Luis Gonzalez in November 2001 came flooding back) to put the Red Sox up 7-6, and Professor Thom's went into a total frenzy. It seemed like the walls were literally shaking.

Hideki Okajima came in for Jonathan Papelbon, who pitched the last two nights, and got the save, including getting Rodriguez on a soft liner to second for the second out. (I love the way the NY Post front-page headline was just A-Rod's two HRs, but the loss was only in little print. However, the NY Daily News pointed out Rodriguez' out in the ninth in one of their headline stories today. They'll be booing A-Rod again soon in the Bronx, just wait and see.)

BTW, did anyone else notice that Johnny Damon (you remember him, the former Sox centerfielder) went 0-for-5 and two strikeouts last night?

Professor Thom's exploded in delight after the game. I was hugging and high-fiving my friends last night, and the emotion was simply incredible. Eric couldn't believe the Red Sox beat Rivera again, and that he brought back that special memory to light again. It was a huge, big-time win for the Sox, in a game the Yankees simply needed to have but let get away. Torre knew that and pulled out all the stops. But he badly managed this game. He brought in Mike Myers at the wrong time, to face Big Papi (but up by 4 runs with no one on base?), yanked Andy Pettitte too soon, and pulled Jason Giambi for a pinch-runner ill-advisedly in the eighth (he would have batted in the ninth). After the game ended, we all drank a toast to Joe Torre for his badly managed game. Thanks again, Joe.

And now you have to wonder if Mariano Rivera is hiding an injury, or worse for him, finally in decline. However, we've seen him get off to slow starts before, so you have to be careful here. But if his glory days are behind him, the Yankees are in trouble. Real trouble.

Last night was also the 95th anniversary of Fenway Park, as it opened on April 20, 1912. And on that day, the Red Sox also beat the Yankees (then known as the Highlanders) by the same score, 7-6, but in 12 innings. That season, the Red Sox celebrated their new home by winning the World Series. (The Sox also wore green jerseys last night in special remembrance of the late Red Auerbach. Yes, wearing "green" to remember "Red." You gotta love it.)

It was a difficult night for 7 1/2 innings, but the memorable finish made the night worth all the bother. It was a night no one wanted to see end, and the memories of the special nights in October 2004 back for a brief reprise.
Posted by The Omnipotent Q at 11:57 AM

I think Doug Alphabet was not guarding the line because the advance scouting of the spankees said he couldn't get around on the fast ball. At least that is what I think, doesn't matter though because that was the big hit of the game and in my opinion Coco was the star of the game.

I definitely agree. His catch will earn him a new respect from Sox fans as well. It was a superhuman effort, and his bat is heating up. Hopefully, he'll be just fine.

His(Crisp's) Bat is heating up, as Ap-Rod failed to homer, yesterday, because THE WEATHER warmed up.