Another Fine Day With The BLOHARDS 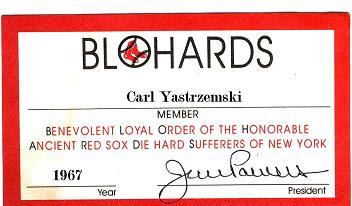 It was another great afternoon I spent with the BLOHARDS on Friday, at their spring luncheon at the Yale Club, across from Grand Central Station. A good crowd of about 200 Red Sox fans turned out for it, despite the rainy weather.

I attended with Chris and Jim from Professor Thom's, and Chris spoke about the bar for a few minutes. I didn't do trivia this time around, but Joe from the BLOHARDS asked me if I'd do some trivia for the next gathering on August 28, which I eagerly agreed to do.

Red Sox announcer Joe Castiglione was on hand with Red Sox pitcher Kyle Snyder. He's a big guy, about 6'8", and Joe asked him a number of questions about playing for the Red Sox. Jazz musician and Red Sox fan John Pizzarelli was there playing standards with his bassist and piano player. (He's best known for the "Foxwood's" commercials. "It bought me a house", he said.)There was a funny video tribute about the Opening Day bus trip the BLOHARDS make every year, as well as about the current season so far.

There were prizes given out, and some Red Sox questions were asked of the audience (again not be me). I was able to participate, and I got the first question correct: "Which two Red Sox relievers' last names from the early 1980s sounded like a weather forecast?" Answer is: Mark Clear and Chuck Rainey. I won a copy of Robert Sullivan's memoir, "Our Red Sox," about growing up a Red Sox fan. Robert was kind enough to autograph it after the luncheon.

Film critic as well as huge New York-born Sox fan Jeffrey Lyons was there, as well as Charles Steinberg, who handles communications for the club. He closed the luncheon, and took questions from the audience. I asked him about the NESN blackouts in NYC of shows like Red Sox Rewind and the Impossible To Forget documentary, and he said that the Red Sox get complaints from fans about that all the time, but even after they get action from MLB about them, they continue to happen. Steinberg kiddingly said that the cable companies do it to anger New York Red Sox fans. Another person asked him about Cablevision not offering Extra Innings. He said that MLB was pissed off about having to offer the cable companies the package after making the deal with DirecTV, but as far as Cablevision goes, fans have to put the pressure on them to bring it aboard. So I guess I'll be calling Cablevision until it happens (if it does).

Despite the gloomy weather, it was a great afternoon to be around fellow Red Sox fans and chat about the current AL East standings. (Who's in last place right now?) My thanks to Joe, Peter, Ray and Frank from the BLOHARDS, who always put on a great show for the fans. I look forward to the next meeting in August, and when I can do some more Red Sox trivia. I'll be rolling out some of my tougher ones for it!
Posted by The Omnipotent Q at 12:15 PM