A Couple of High School Kids? 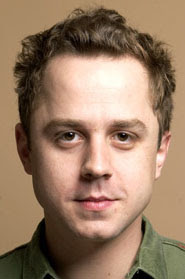 I was watching the Red Sox game with the Yankees tonight with my dad, and when Dustin Pedroia came up for the Sox, he said, "He looks like that guy who played a medic in 'Saving Private Ryan.'"

Upon closer review, I agreed with my dad that Pedroia does bear a resemblance to Giovanni Ribisi, who eventually gets killed in that epic film. (It should have won the Academy Award for Best Picture in 1999. "Shakespeare In Love?" Give me a break.)

It looks like you can barely get a whisker between both of these guys, and they both look like they belong back in high school.

At least Dustin had two hits tonight and saved the game in the eighth. Whatever happened to Mr. Ribisi?
Posted by The Omnipotent Q at 1:22 AM

Hey, you leave him alone!

Giovanni Ribisi played Rob LaRose in Vin Diesel's only good film EVER, "Boiler Room," and that same year he played the whiniest maguffin in the history of film in "Gone in Sixty Seconds."

Pedroia's drawings are still on his mom's fridge.

I loved "Boiler Room" too, Rob...Didn't know he played you in the film.