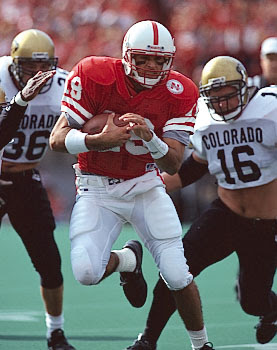 Yesterday I received a really nice email from John Fahrer, who is a big Red Sox fan from Omaha, Nebraska. John has followed my writings here at The Mighty Quinn Media Machine, and also at Bornintoit.com for some time. He drops me a line from time to time with his thoughts on some of my columns and about the Red Sox. John is also a huge Nebraska Cornhuskers fan.

John's email yesterday was about his favorite all-time player who wore number 18: Brook Berringer, the Cornhuskers quarterback from the mid-1990s. Berringer came out of nowhere in 1994 to lead Nebraska to the Orange Bowl against Miami that year and the national championship. Berringer typified that "everyman" quality, and won a place in the hearts of Cornhuskers fans everywhere.

He was looked upon as a pro prospect, but two days before the NFL Draft in 1996, he was tragically killed in a light plane crash in Nebraska. It was 11 years ago today that the crash occurred. John sent me an email about it, so I thought I would turn this post over to John, about his "Favorite Number 18: Brook Berringer."

My Favorite Number 18
by John Fahrer

A little while back, you wrote about the number that was issued to new pitcher Daisuke Matsuzaka: 18. That number of course was also worn by notable Red Sox outfielder Dustan Mohr as well as that Damon guy. In my neck of the woods, the number 18 is and always will be reserved for one man. This young man experienced many highs and lows in his college career. He spent his junior season filling in for the injured quarterback ahead of him, getting hurt himself, and ultimately played a major contribution in winning a National Championship. His senior season saw little playing time. But despite that, he remained a very popular player and was thought to be drafted by the NFL in the early rounds. Unfortunately, this young man was taken from us just days before the draft. I'm not sure if this guy is all but forgotted outside of Nebraska (much like Tony Conigliaro seems to be forgotten outside of Boston), but it's been nearly eleven years since that heartbreaking day and I'd very much like to share with you my memories of my favorite number 18: Brook Berringer.

Brook Warren Berringer was born in Goodland, Kansas in 1973. He grew up watching Nebraska football and it was his life-long dream to one day play for coach Tom Osborne. That dream came true when he arrived in Lincoln in the early 1990's. It was a bittersweet fulfillment (at the time) however. Also arriving that fall was option-wiz Tommie Frazier of Bradenton, Florida. Brook would be number 2 on the depth charts for most of his career.

In 1994, Frazier was sidelined early in the season due to blood clots in his knee. It was now Brook's time to shine. Berringer kept his team undefeated and even suffered an injury of his own along the way. After taking a devastating blow from the previous week's game, Berringer was pulled from the Oklahoma State game and would miss the following week's game against Kansas State. After that short haitus, Berringer remained durable for the remainder of the season.

Tommie Frazier was clear to play in the 1994 Orange Bowl against Miami, which meant back to the bench for Brook. After trailing in the first half, Osborne put Berringer back on the field for the second half. With Berringer back in the game, the Huskers rallied back to tie the game. But ultimately, the winning drive included Frazier on the field (the touchdown was a 20-yard rush by current Detroit Lions fullback Corey Schlesinger). Frazier may have been on the field to taste the victory, but everybody knew that Berringer was the man who was responsible for leading the Huskers to the 1994 National Title. And the fans never forgot that the following season...and they never will.

Berringer had great size and the right tools to be a successful quarterback in the NFL. But on April 18, 1996, Berringer (who was a licensed pilot) and his girlfriend's brother were in a small aircraft above Raymond NE. The plane lost turbulance and crashed into an alfalfa field. Neither passenger survived.

Tom Osborne delivered the following statement shortly after hearing of
his former player's death: "The Brook I knew, there is nothing he could have done better. The length (of his life) was not what you would have liked. But the quality couldn't have been better."

Eleven years later, that statement seems more true than ever.

Thank you for sharing, John.
Posted by The Omnipotent Q at 6:08 PM