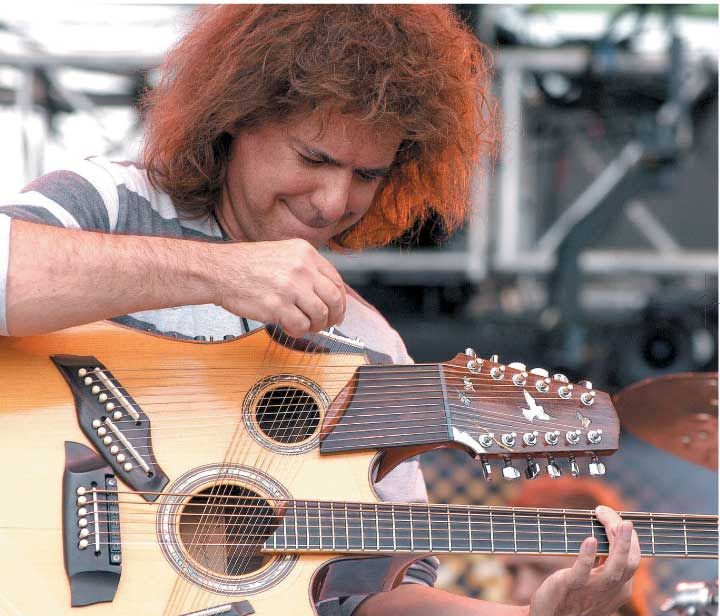 Back in early March, I was able to land a ticket to see Pat Metheny at Carnegie Hall on April 11. When I first got it, I went to my Red Sox schedule, as I wanted to see who they were playing and at what time that day. It was the Seattle Mariners at 7:05 that night. I figured it was one night I'd pass on the Red Sox to see the show, and I hoped it wouldn't be an important game. It being an early season contest, I hoped for the best.

Last night turned out to be the Fenway Park debut of Daisuke Matsuzaka. I made a decision earlier this week that I would go into Professor Thom's for the first inning to check out Dice-K's start, and then head up to Carnegie Hall to see the Pat Metheny show, which fortunately didn't start until 8 PM.

The bar was jammed by game time. The game had the feel of a postseason game or a game against the Yankees, as so many people wanted to be together to the see Dice start. And of course, the first hitter to the plate for Seattle was Ichiro Suzuki. The flashbulbs were a-poppin' when Suzuki took the first pitch for a strike. He would ground back to the mound, the most popular ground ball back to the mound since Edgar Renteria hit one back to Keith Foulke on a memorable October night in 2004. Jose Vidro singled with two outs, and I thought, "Well, he won't pitch a no-hitter tonight."

After the top of the first I took off for Carnegie Hall by subway. I made it with plenty of time to spare. I had a tremendous seat, in the 11th row off the stage on the main floor. I've been to Carnegie Hall once before, to see Eric Idle do a one-man show in 2000. Before the show began, I checked my cell for the Sox game score, and it was 1-0 Seattle in the third. "It's early" I thought.

Pat Metheny is a world-class jazz guitarist whose been making great music since 1975. He's probably best known to many for his work on "The Falcon and The Snowman" soundtrack with longtime friend and keyboard player Lyle Mays, and the song, "This Is Not America" that he did with David Bowie, and was actually a hit song in 1985. (He's also well-known for the shaggy hairstyle he's always had as well.) He opened the concert with pianist Brad Mehldau, and they did a 35-minute, three song acoustic opening. Then their bassist, Larry Grenadier and drummer, Jeff Ballard, came on stage. They then did four songs, mostly from the last two Pat Metheny albums.

The band was very tight, and I was especially impressed with Jeff Ballard on drums. There was almost no chat with the audience until that set concluded, and Mehldau introduced the band. Then, Metheny brought out one of the most unusual instruments I have ever seen: a "Pikasso guitar." It has 42 strings on it, and it looks like (as well as sounds like) a cross between a guitar and a harp. (See the photo above, as it is Pat playing the Pikasso.) Metheny played a solo tune on it, and Mehldau explained that the guitar was especially made for Metheny.

The band came back on afterward and they played two more songs. I had my cell off during the concert, as there were parts of it (especially during the acoustic set) that if it went off, the whole concert hall would have heard it. Just before the encore started, my friend Steve sent me a text message: SEA 3, BOS 0. FINAL. Dammit, the offense went south again.

In all, the concert went two hours and fifteen minutes. I really enjoyed it, as Pat Metheny was in fine form, playing all types of guitars, and giving his fans their money's worth. He has always been a bridge between contemporary and traditional jazz, and his band was in great form as well. (For more, Pat's official web site is at: www.patmetheny.com)

When I got home, I discovered the Red Sox got only one hit the entire game, a single by J.D. Drew in the eighth. ("What, one goddamn hit?" as Bob Uecker famously asked in "Major League.") Felix Hernandez simply stymied the Sox all night long, and bested Daisuke in his Boston debut. Very frustrating to see the Red Sox bust out with 14 runs one day, and offense barely gets one hit the next. The Red Sox have now been shutout twice in eight games, and scored one run or less three times. I know it's very early in the season, but let's hope this isn't a trend. But the pitching continues to be very, very good.

As far as last night goes, I think I made the right choice to see Pat Metheny.
Posted by The Omnipotent Q at 11:15 AM

Well, look, you made the right choice anyway, regardless of the outcome of last night's game. You'll probably have 30 or so more chances to see Dice-K this year. How often will Metheny be on TV? Case closed.

Pat Metheny is a valid reason to miss a Sox game. By the power vested in me by years of suffering at the hands of the Red Sox and one season of unparalleled ecstacy, I absolve you.

But after all that about the Guillen/Donnelly tension at the opener, you totally neglected to mention that Matsuzaka HIT Guillen with a pitch last night.

NOT an accident. Dice-K is serious about playing American baseball. :-)

Thank you so much for your forgiveness, TRS. I'll try to let it happen again...

Actually, Rob, I didn't know that Dice-K plunked Guillen. Good to see Dice backing up his teammates. Guillen is a hothead and real creep. I'd love to see him and Brendan Donnelly in a cage match on the next WWE PPV. Donnelly would give him a good ass whoopin'...