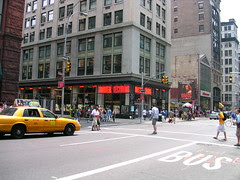 I was watching the football games at Professor Thom's today when my friend Adam broke some bad news to me. He saw a sign in the window of the Tower Records store in Greenwich Village that said, "Going Out of Business Sale."

After watching the games, I went to E. 4th and Broadway (pictured) and I did indeed see those signs.

Tower Records is going out of business.

I knew that Tower had some really serious financial problems, but there was hope that the chain would survive. But they were purchased by a liquidation company and have begun selling off the remaining inventory.

I was really sad to see the store I worked at for six years, from 1984-1990, closing its doors. I have about ten million memories of my days there, and most are really positive. I met some great friends there (including my late friend Joyce), some of which I am still in contact with.

I'll never forget the in-store appearances, the celebrities I saw come into the store, being interviewed by TV and radio when the Beatles CDs were released in 1987 (I was pop/rock CD buyer then). It was six of the most memorable years of my life.

Tower was founded in Sacramento, California in 1960, and quickly expanded throughout California and the West Coast, with the Sunset Strip store its most popular. Tower opened their Village store in 1983, and it was a big hit from the day it opened. It eventually became Tower's flagship store. I was hired in October 1984, as a rock floor clerk, and I eventually moved up to supervisor, pop/rock CD buyer, and night closing manager. (I was there for the fateful Game 6 of the 1986 World Series.)It was such a cool place to work in most of the time. (Although I hated doing inventory, as I had to get there at 6 AM for three straight days!)

Tower overexpanded in the late 1980s and early 1990s, and ran into mega-financial problems in the late 1990s. They sold off their Japanese and European operations to try and stay solvent, but it was just postponing the inevitable. The Internet also was a big reason Tower's sales plummeted, as it has effected many retail operations in a negative way.

For more on the end of Tower, check out this link: http://www.hollywoodreporter.com/thr/article_display.jsp?vnu_content_id=1003221956

A part of my past is disappearing, and I can't help but feel sad it is going away.

I'll always have a soft spot in my heart for Tower Records.

Some music store next to my univeristy closed. It was pretty new, so no one cared.

I don't know, I never felt any connection to any place to really care about it.

I know how it feels when a special music store closes. It's tough. And I so remember that year of '87, and not just because Bruce had a new album out (Tunnel of Love), but because of the CD releases of the Beatles. Even though A Hard Day's Night (LP #3) and Beatles For Sale (LP #4) SHOULD have been released in stereo. The first two were made in glorious mono and butchered after that. But they sounded great. All 32 minutes or so of each. Fast forward from '64 to '65 and '66, and you have the ultimate growth showcased.......RUBBER SOUL and REVOLVER. No one can match those back to backers. EVER. And today would have been John's 66th birthday. Wow.

Thanks so much for your thoughts, Peter.

Wow...I worked at the Tower on 4th and Broadway as well (mid 90's) What an amazing time in my life and the best job I ever had. I too remember all the celebrities... I was there when Brian Ferry did and instore and Dave Stewart was our front window display for a day. Motley Crue and The Go-Go's both did instores when they got back together. My favorite though was a little known singer at the time let me follow him around like a puppy dog because he knew I had a crush...his name was Jeff Buckley.
I also remember two cabs that were racing around the corner and one ended up coming thru the front doors.
Inventory wasn't fun especially when we got up to the classical department, but holidays were a blast as we drank alcohol from our plastic cups still managing to close the store without incident.

I am planning a trip to NY next year and am completely heartbroken that I will not be able to walk onto the rock floor one more time.

WOW...Tower Records was like NIRVANA to me when I spent a good portion of my college years doing radio...

I'm with you Q, it sucks when stuff that has long be a part of our lives goes away...

It was a blast working at the E. 4th Street store, Holly. I really miss it, and now I'll miss it even more.


And I feel like part of my past is gone, Christine. Now it will only exist in my mind, and on my blog. Tomorrow, I will relive some good old memories...

How do I know Q? Working at Tower. How did I move to Sacramento? Working for Tower. I spent 7 1/2 years there. I was never closer to a group of people than I was to the crew that was at 4th & Broadway in the 80's. As one coworker said, "If you had to have a wasted youth, it was a good way to waste it"! How many employers affect the employees in the way Tower did us (even if we were always complaining about our paychecks).

I couldn't have put it any better, Joan. Tower may soon become no more and fade into history, but I made friendships at 4th and Broadway that I will treasure forever. It was the best time of my life in many ways, and we will always have Tower as a bond.

Bonds that will NEVER be broken.