Remembering The Greatest Comeback/Choke Ever 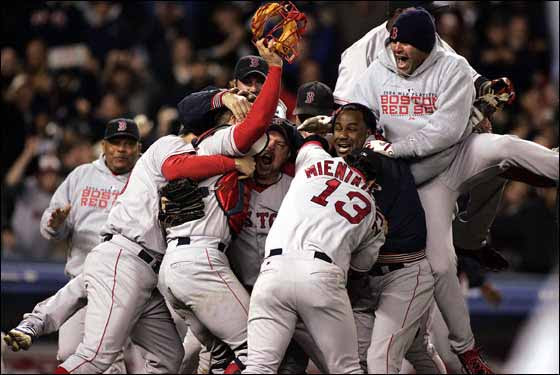 I was in a packed Riviera Cafe and Sports Bar the night of October 20, 2004. I was confident on the outside, but nervous as hell on the inside. The Red Sox were poised to make baseball history, and against the team that had caused them and their fans such misery time and time again.

Two people offered me tickets to the game the night before, and I turned them both down. I HAD to be at the Riv that night. I was there just one year earlier, when a sure win Game 7 turned into another chapter in the Red Sox book of heartbreak. Besides, I didn't want to be a live witness if the Red Sox were to go down in another Game 7, and be around that pack of heathen swine in the Bronx.

It would be one of the most memorable nights of my life. I talked to a Daily News reporter before the game, and he turned out to be a Red Sox fan from New Jersey. The bar was buzzing from the moment I got there, about three hours before the first pitch. Every pitch seemed to get either cheers or boos.

The bar groaned when Johnny Damon was thrown out at the plate in the top of the first, but it exploded in cheers when David Ortiz hit the very next pitch over the right field wall to put the Sox up, 2-0. When Damon went deep the next inning with the bases loaded to extend the lead to 6-0, I thought it was a dream. And then I started getting really nervous, thinking to myself, "Why can't it be the eighth or ninth inning now?" The grand slam set off a wild celebration in the bar that my friend Matt wound up breaking his glasses in the crush. (He was a trooper, taking out scotch tape and putting them back together.)

I knew the Yankees were dangerous, but Derek Lowe pitched the best game of his life that night, allowing only one run on one hit through six innings. Damon continued his one-man assault against New York by blasting another homer with a man aboard to put the Sox up, 8-1, in the fourth.

It stayed that way until the seventh, when, for some unknown reason, Terry Francona brought in Pedro Martinez. It put the crowd back in the game, especially when the scored two quick runs as I and the rest of the bar was nervous and grumbling. But Pedro restored order, and Mark Bellhorn crushed a solo shot off the right field foul pole to make it 9-3. Inside, I finally started to think to myself: "AL Champions!"

The Red Sox would add another in the ninth, and when Ruben Sierra grounded out, the single greatest comeback in the history of American sports was finally complete. The Red Sox won the AL flag, and the Yankees earned a choker tag. The Riviera absolutely exploded in delirium, and it went on for a good solid 10 minutes. I will never forget seeing Red Sox fans, yes, Red Sox fans, celebrating behind the third base dugout after the win, especially when the players came out with champagne to celebrate with them.

The Yankee fans would now have to burn all of their "Curse of the Bambino" and "1918" garbage. Sure, they can point to their 26 championships, and the fact that no one in my lifetime will ever come close to reaching that. Fine, and it will always be a part of their resume. But whether they like it or not, the games of October 17-20, 2004, will also long be a part of that resume as well.

For Red Sox fans, it was a deliverance, a gift to all of us who suffered through all the bad times and terrible losses. It was two years ago today that it was completed.

I'll celebrate by opening up a cold one tonight and putting on my Game 7 DVD from the 2004 box set. (And hopefully make me forget what happened just last night.)

No team, past, present, or in our futures, could have beaten our 2004 Boston Red...not then, not now. Nice warm fuzzy memories. For that I thank you.

Sox, I left out. Caught up in the commenting moment.

& Now, The '04 World Champion Red Sox, are the Diamond Standard, by which all 0-3 Comebacks are judged:

& those are Tough Standards;

A reminder, as the 40th Anniversary of The Impossible Dream Team & The Coming of Tom Seaver, is in '07.