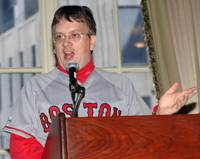 Yesterday I received an email from the BLOHARDS, and it was a wrapup of their luncheon, which was held at the Yale Club back on September 15. I was a featured speaker that day, doing some Red Sox trivia. In their wrapup, which they called a "Virtual Lunch," my part was featured in it. (The photo included here was taken by Julie Cordeiro of the Boston Red Sox as I was doing the round of trivia.) Here's what they had to say:

Professor Thom's resident trivia maven, the Mighty Quinn, made a cameo at lunch and offered up a smorgasbord of puzzlers. The assembled BLOHARDS made short work of Which Red Sock(?) was the first Hall-of-Famer to have played in Little League? (Carl Yastrzemski, duh), but had a harder time with Which Red Sox utility infielder famously caught a rat on the infield of Fenway Park in the early 1980s? (That would be Ed Jurak.) Anyhoo, the whole thing was a lot of fun and we hope Quinn will join us again. You can get his take on the experience here: http://quinnmedia.blogspot.com/2006/09/day-with-blohards.html.

You bet I'll be there again next year. It was a lot of fun, and I hope it becomes a regular thing. My thanks to the gang at the BLOHARDS for the nice write up.
Posted by The Omnipotent Q at 11:35 AM