Patriots Day at The Fens 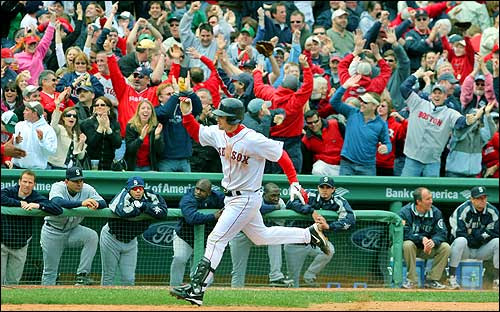 In the Commonwealth of Massachusetts, today was Patriots Day, a state holiday that celebrates the immortal midnight ride of Paul Revere in 1775. That always means two things. The Boston Marathon is run, from Hopkinton into Boston. And of course, the Red Sox play a home game that begins at 11:05 in the morning.

I went to the Patriots Day game once in my life, back in 1987. The day I went was also the 75th anniversary of Fenway Park, and many illustrious former Sox were on hand. (Luis Tiant and Yaz got the biggest ovations.) But on that day, the Sox were crushed by Kansas City, 10-2. The highlight of the game was in the third inning when some fan threw a football on the field, and Sox hurler Bruce Hurst picked it up and punted it towards the Red Sox dugout. The crowd burst into a loud cheer, and it was about the last cheer the Sox got that day. I also checked out the Marathon after the game, and it was really exciting being with the crush of people on Commonwealth Avenue watching the runners go by.

Today, I was still serving jury duty, so I missed most of the game. I found a sports bar downtown to watch some of the game. I got there in the bottom of the seventh, and the Red Sox were down, 5-4. The bartender told me David Ortiz had hit two home runs, and on his next at-bat in the eighth, he crushed one that I thought was gone. Unfortunately it landed in Ichiro Suzuki's glove in front of the right field fence. But the Sox tied the game on Trot Nixon's double and Jason Varitek's single.

Seattle scored a run in the top of the ninth to take the lead for the fifth time in the game. I had to leave the bar at the end of the top of the ninth and return to court. But I got home and found out that with two outs, Kevin Youkilis just beat out and infield single, and Mark Loretta (pictured above) blasted an Eddie Guardado pitch into the Monster seats to give the Red Sox a 7-6 win. Loretta's homer was the first time they led the entire game. The best part: I have Loretta on two of my three fantasy teams.

The Red Sox are now 9-4 after taking three of four off the Mariners. They are finding ways to win the close games, even with their offense struggling to score runs. The pitching continues to do a superb job, and even Lenny DiNardo did a decent job as an emergency starter.

Tampa Bay now comes to town to close out the homestand. And Pedro Martinez goes for his career 200th win tonight at Shea against Atlanta. Good luck Pedro.
Posted by The Omnipotent Q at 4:57 PM