The Long National Nightmare Is Ending 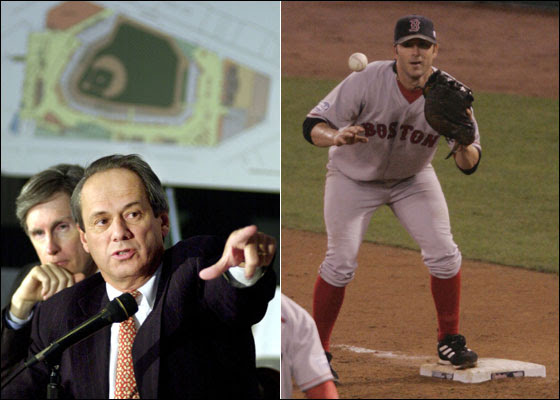 It finally appears that the Red Sox World Series ball from 2004 is going to the place it rightly belongs: to Baseball's Hall of Fame. The ridiculous nonsense over who rightly owns the ball has finally come to a close. The Arizona Republic reported today that Doug Mientkiewicz (photo right), who caught the final out of the 2004 World Series on the grounder back to Keith Foulke, has agreed, along with the Red Sox front office (John Henry and Larry Lucchino in photo left) and the MLB players union, to send the ball to Cooperstown so it can be displayed there.

I've heard of some really silly stuff in my life revolving around baseball, but this was one of the more bizarre episodes. In my opinion, Doug is the rightful owner of that ball, and I'm glad he has done this. I don't know why Red Sox management was so keen to get that ball back from him, as the average Sox fan really doesn't care who owns it. It's nice that the fans who go to the Hall of Fame can see it displayed. In baseball history, I can't think of one instance where a team felt they owned a "final out" ball like this. Many players who caught final outs still have them. (Like Mike Timlin, who was on the mound for the final out of the Blue Jays first World Series championship in 1992. He has the ball displayed in his home.)

It only took about 18 months to settle this dispute. Now I can sleep better at night.
Posted by The Omnipotent Q at 11:38 AM

Leave it to that Self-Important Bloho, Larry Lucchino, to cry about this;

History has a way of repeating itself.