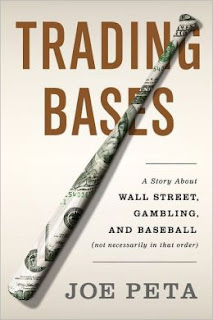 I just completed reading a new book called "Trading Bases: A Story About Wall Street, Gambling and Baseball" by Joe Peta. It's an interesting mashup of Las Vegas meets Sabermetrics.

Peta was a 15-year veteran of Wall Street, a trader who lost his job when Lehman Brothers famously collapsed in 2008. In early 2011, he was injured on a New York City street with a severely broken leg. He was confined to a wheelchair for several months, and hit upon an idea while he was recovering: make money by using sabermetrics to bet on the entire 2011 MLB season.

He swears it's better than betting on football or basketball.

Peta created an investment model based on the sabermetrics favored by Bill James. He made season projections for every MLB team, and took on the Las Vegas betting line.

"Trading Bases" is really for the statisical nerd in all of us. I'm not the biggest proponent of sabermetrics. It definitely has its place but I'm not a slave to it (I'm not one who thinks like Joe Morgan once said, about how sabermetrics is "ruining the game"), but I did like many of Peta's stories of working on Wall Street and his little asides. (Although I take umbrage with his swipes at Red Sox fans, and the section when he becomes a Yankee fan, after being a lifelong Phillies fan, in 1996 made me cringe.)

Peta made money off his model in the end, including the 2011 playoffs. He did have times when he lost money in this venture (especially midway through the regular season). But in the long run, over the course of an entire season, he made money. I got the impression that this is something you'd have to be committed to for a long stretch of time to see any real cash.

So, if betting on sports is your thing, you're into WAR and PECOTA, and think Bill James is god, then "Trading Bases" is definitely for you.
Posted by The Omnipotent Q at 11:39 AM