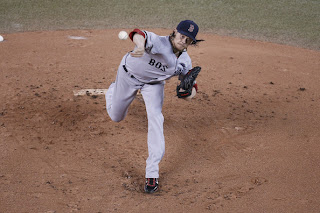 So, do you think the presence of John Farrell made a difference with this guy or what?

Mike Napoli hit two bombs last night (and they both went up decks in the Rogers Centre), and Mike Carp, Daniel Nava and Stephen Drew (his first Red Sox home run) also went deep. The Red Sox have hit 31 home runs on the season, and an amazing 16 have been against the Blue Jays in Toronto. Balls are just flying out of the Rogers Centre so far this season.

No team has ever come back from an 0-3 deficit to win a playoff series in NBA history.

So, are the stars aligning here for the Celtics? We'll see.

Anyway, the Red Sox begin business on May 2nd with the best record in baseball. The last two times the Red Sox had baseball's best record going into May? 2004 and 2007. We all know what happened in the end in those two years.