Exactly What An Ace Does 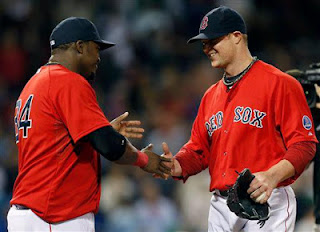 Jon Lester was nothing short of spectacular on Friday night, allowing just one hit in the Red Sox 5-0 win over Toronto.

He faced just one man over the limit, and retired the first 17 hitters before Maicer Izturis doubled down the left field line in the sixth. He then retired the next 10 to complete a masterful performance. It was as good as his 2008 no-hitter, when he faced just 29 hitters that night.

Lester struck out just four, but didn't go to many 3-2 counts. It was exactly what the Red Sox needed, having dropped six of their last seven. Both he and Clay Buchholz (who pitches today) have been pitching like aces, stopping losing streaks. Lester is now 5-0, and it was his 10th career complete game.

The Sox scored four in the seventh to ice the game, after struggling most of the night with runners on base. Daniel Nava got the key hit, a two-out double that scored Shane Victorino and Dustin Pedroia.

New York and Baltimore both won last night, so the Sox remain tied atop the AL East with both of them today.
Posted by The Omnipotent Q at 10:50 AM