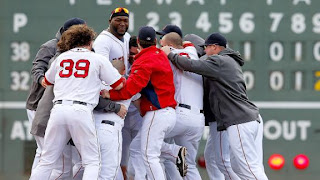 It was a terrific weekend for the Red Sox, as they pulled off two memorable comeback wins the last two days, and are now sharing first place with the Yankees, who lost in St. Pete today.

Old friend Terry Francona rolled into town with his hot Cleveland Indians club, and left losing three of four. The Sox were losing most of Saturday afternoon, but scored four runs in the eighth inning to win, 7-4. (The Sox have now beaten Francona and his Tribesmen 6 of 7 times this season.)

But they losing from the first inning on on Sunday, as the Tribe opened with two runs in the first off Felix Doubront. He gave up two solo dingers later in the game to Jason Kipnis and Nick Swisher (did you notice how Swisher was booed lustily all weekend?), and it looked for sure the Sox would gain just a split in the series.

But they pulled off a miracle in 9th, down by 5-2. Dustin Pedroia walked and David Ortiz doubled. Both scored on consecutive ground outs, and the Sox were down 5-4 with one out to go. But Jonny Gomes walked, Stephen Drew singled, and Jose Iglesias, in the best at-bat of the inning, drew a walk on a close 3-2 pitch.

That set it up for Jacoby Ellsbury. Tribe closer Chris Perez left the game with an injury to his pitching arm after the count got to 2-1. Joe Smith came on, and threw Ellsbury a strike, and he was waiting for it, driving the ball to left center, and two runs came in, and the Red Sox got the win.

They were losing since the top of the first, and only led after the last pitch of the game had been thrown. Amazing.

The Sox are now tied with New York for first place. They will face another old friend this week, as Jonathan Papelbon returns to Boston for the first time since he left in 2011 with the Philles, in a four game, two cities interleague series. (I actually like this format than the other one, as they cut down the six games against the interleague "rival" to four.)

But Clay Buchholz will NOT make the start tomorrow, as he has an irritation in the right AC joint in the collarbone area. It isn't serious and he may make his next start later this week. Alfredo Aceves will make the start instead. (God help us all.)
Posted by The Omnipotent Q at 10:46 PM