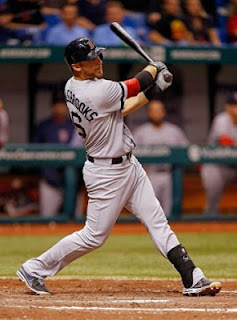 There may not be such a thing as a "big game" in mid-May, but last night's Red Sox 4-3 win sure seemed like one.

The offense was shut down again last night, this time by Tampa Bay starter Alex Cobb. Felix Doubront was better than he's been, but walked six in 5+ innings, and the Rays broke a 1-1 tie right after he departed.

The Sox had split the first two games in St. Pete, and beginning a nine-game road trip. it was 3-1 in the ninth, and they fortunate to run into Fernando Rodney, who is not having the stellar year as a closer he had in 2012.

The inning was feast or famine for Rodney. He walked the bases loaded and struck out two. He went to 1 and 2 on Will Middlebrooks before he slammed a pitch into the gap in left field to clear the bases and put the Red Sox out front for the first time on the night.

Junichi Tazawa, who pitched the 8th inning, got the win. He allowed two singles in the ninth but held on.

Had the Sox lost, they would have dropped the series, but due to Middlebrooks' heroics, they start a nine-game road trip with a series win. I looked at the nine games before it began and figured they needed to win five. Now they are off to Minnesota for a weekend series, and then to Chicago.

New York's loss last night but the Red Sox in second place, one game back.
Posted by The Omnipotent Q at 10:48 AM