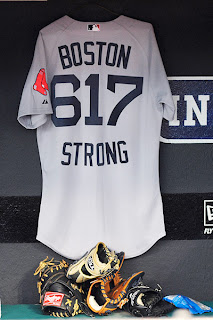 I had a busy night with Trivia on Tuesday at The Mad Hatter, but I was able to get the Red Sox-Indians game on one of the TVs in the bar across from where I was hosting.

It was clearly a very emotional night in Cleveland. The Red Sox were going up against their former manager Terry Francona for the first time since he left, but that of course, took a back seat to the terrible events that shook the Boston Marathon on Monday.

The team hung a special jersey in the dugout: "Boston 617 Strong." (617 is the Boston area code.) Both teams wore a black arm band in memory of the victims.

And the Sox gave the fans back home a treat, scoring seven runs in the second inning, and that was all they needed for a 7-2 win. Felix Doubront went 5 innings, allowing two earned runs. The Sox starters continue their streak, now at 13, of games where the starters have gone at least 5 innings and allowing 3 runs or less.

It was also an "historic" game as well. It was the first time since 1900 that a nine-inning game has 25 or more strikeouts and 15 or more walks. The Sox struck out 16 times, and drew 9 walks. And still managed to win.

They are now 9-4. These boys continue to impress, and even under some very trying circumstances.
Posted by The Omnipotent Q at 11:55 AM