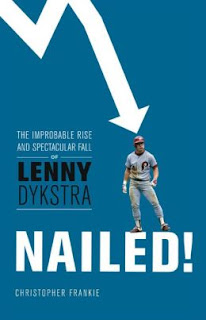 Lenny Dykstra had legions of fans during his playing days with the New York Mets and Philadelphia Phillies, from 1985-1996. His run-through-a-wall, take-no-prisoners style endeared him to the fans of both northeastern baseball cities. He never quit, and always seemed to come up big when his team needed him most.

Christopher Frankie, who worked for Dykstra in the late 2000s, has chronicled the life of the former baseball star-turned-Wall Street magnate in "Nailed! The Improbable Rise and Spectacular Fall of Lenny Dykstra."

It's a cautionary tale to be sure. After Dykstra's career ended prematurely in 1996, he was determined to build a financial empire. He built up a car wash business in Southern California and sold it for $55 million. He bought Wayne Gretzky's mansion for $18 million, and flew around the country in private jets. He was living the good life, and appeared to living out his dreams and fantasies.

Chris Frankie went to work for him in 2007, with a magazine he was putting out for ex-athletes called "The Players Club." Frankie grew up a Mets fan and thought working for Nails was his dream come true.

It was a nightmare for him. Frankie chronicles a very different Dykstra from the one the fans knew in his playing days. Reckless with money, overly demanding, racist, homophobic, and generally not the kind of guy you'd want to split a beer with after work. His attitude towards women was equally appalling.

"Nailed!" is not so much a baseball book (although it does chronicle Dykstra's life before and during his playing days), but mostly a horror story told by Frankie of working for an unstable individual who built up an empire made of cards. Dykstra does whatever he can to keep that empire viable, and ripping off those he was closest to wasn't beneath him. It was all built on lies, cheating and deception, and it all eventually came crumbling down on him.

It's a truly stranger than fiction story, and it ends up with a deadbeat who eventually ends up paying the piper, and winds up behind bars.

If you grew up loving Lenny Dykstra and wondered what the hell happened to him that led to his landing in jail last year, this will open your eyes, and shatter some illusions as well.
Posted by The Omnipotent Q at 11:23 AM