And In The Role of Mike Piazza: Daniel Nava 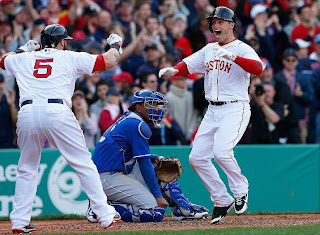 This day needed a storybook ending, and it got one.

The Red Sox were down, 2-1, with two outs and two on in the bottom of the 8th. David Ortiz had bounced into a DP two better earlier, and it was rather deflating. Mike Napoli walked, and up came Nava. He had been picked off second base by Kansas City catcher Salvador Perez in the seventh, and the Sox came up empty in that inning.

Nava then slammed a pitch over the bullpens in right to make it a 4-2 game. Andrew Bailey was shaky in the ninth, allowing a home run, a walk and a single. But he got Alex Gordon to ground out to shortstop to end the game and give the Sox their 7th straight win, 4-3.

Clay Buchholz got his 4th win with another terrific effort, and the Sox starting pitchers have now gone 16 games from the start of the year allowing less than three runs.

It was an emotional day as the Red Sox played their first game in Boston since the terrorist attack at the Boston Marathon last Monday. But doesn't what happened in that 8th inning sound vaguely familiar?

To me, it sure does. 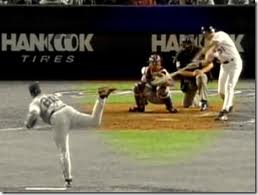 It takes me back to September 21, 2001. The Mets played  the Atlanta Braves in their first game back in New York since the attacks on the World Trade Center. The city and the country were wounded, and it was an emotional night. First responders and law enforcement officials were on hand, and the fans came out to thank them for all they did in the aftermath of the attacks.

In the 8th inning, the Mets were down, 2-1 (like the Red Sox today), and up stepped Mike Piazza, with two outs and one man on. And he blasted what is generally regarded as the biggest home run hit in Mets history, and the Mets held on for a 3-2 win over the Braves.

Sounds like what Daniel Nava did in the 8th inning for the fans of Boston.

Thank you, Daniel. But more importantly, thank you to all the first responders who risked their lives this past week in Boston.
Posted by The Omnipotent Q at 6:22 PM