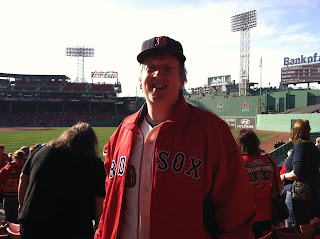 Yesterday was my third trip to Fenway Park for the home opener with the BLOHARDS, and third time I've seen the Red Sox win: a 3-1 victory over the Baltimore Orioles.

It was an enjoyable trip up on the bus from Connecticut, and even happier one returning last night. As a group we had tickets in the right field grandstand just to the left of the Pesky Pole in foul territory. Clay Buchholz was terrific, pitching seven shutout innings. He walked four, but was never really in any trouble. The Sox couldn't solve Wei-Yin Chen for six innings, until they finally broke through in the seventh for three, as Daniel Nava blasted a three-run shot to give the Red Sox all the offense they needed. (There was a bit of grumbling before the game that Jackie Bradley was not in the lineup, sitting in favor of Nava. Is John Farrell a genius or what?)

Joel Hanrahan did the tightrope walk in the ninth (got a feeling that won't be the last time this year I write that), giving up a home run and a double, but nailed down his third save of the year.

It was the 9th straight win by the Red Sox in their home openers. The last loss was in 2004 to Toronto.

BTW, it was also 44 years to the day I went to my first ever Opening Day game. That was at Shea Stadium, when the Mets played the Montreal Expos, in Montreal's very first game in their history. And the Mets lost, 11-10, in a very exciting game. But the year would end happily for the Mets and their fans, with their first ever championship.

The win puts the Sox at 5-2, tied for the best record in the AL. I continue to be impressed with this Sox club. Terrific starting pitching, tight defense (although Dustin Pedroia fumbled a couple yesterday but neither were costly) and clutch hitting. This doesn't look like a world-beater club by any stretch, but they have come out of the gate looking like a hungry, motivated team.

Let's hope they keep it going. There's a lot to like here.
Posted by The Omnipotent Q at 11:02 AM