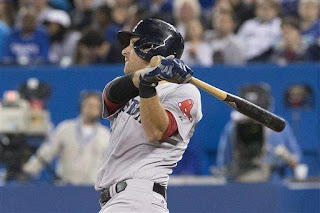 Before this season began, I looked at the schedule and saw the Red Sox opened on the road, with six games in New York and Toronto. (Is it my imagination, or do the Sox ALWAYS seem to play a series in Toronto before their home opener? It seems that's been happening a lot in recent years.) I figured if they could split those six games, that would be a good start.

And after the last two years beginning 0-6 and 1-5, the Sox REALLY needed to get out of the blocks in good shape.

So what do they do? They go into both cities and win both series, 2-1. And they looked mighty good doing so.

Jon Lester looked like the Lester we have all come to know and love, winning his first two starts, and in very impressive fashion in Toronto on Sunday. Seven shutout innings, and was never really in any kind of trouble. He looks like the ace his needed to be, as the jays did not a runner past second the entire game.

The Sox gave him five runs before he ever took the mound. The first five batters all got hits off R.A. Dickey, and all scored. It was capped by the first of three blasts by Will Middlebrooks, who just missed hitting a fourth, putting Melky Cabrera on the warning track in the 8th inning. The fours were wild for Will: 4-for-4, 4 RBI, 4 runs scored and 4 extra base hits.

The Red Sox took the "John Farrell Love Fest" on Friday, and got shutout on Saturday by some good Toronto pitching. But today's 13-0 win showed me something, as the entire lineup contributed (except for Jarrod Saltalamacchia and Jackie Bradley, who both took the collar). The Sox hit no home runs in New York, and there was speculation about this team's power with David Ortiz out. But they answered that today, hitting six home runs (Jacoby Ellsbury, Daniel Nava and Mike Napoli also all added dingers).

I had the Blue Jays feed on TV all weekend, and you can see that many fans are buying into this Blue Jays "Dream Team" nonsense. Granted, six games don't make a season, but the players better not buy into the hype. They could end up being a carbon copy of the 2011 Red Sox if they are not careful.

The Red Sox pitching over the first six games has been top-notch, the defense playing well and they have been hitting big time in the clutch. (Jays announcers said that the Red Sox had more hits with runners in scoring position in the first inning--four--than the Jays have had all season so far.) That certainly is a recipe for success. It's early of course, but there are good signs everywhere so far.

I'll be at the home opener at Fenway on Monday afternoon, and will have a report about it on the blog on Tuesday. It will be my third opener in four years.
Posted by The Omnipotent Q at 6:49 PM