All About BOSTON Today 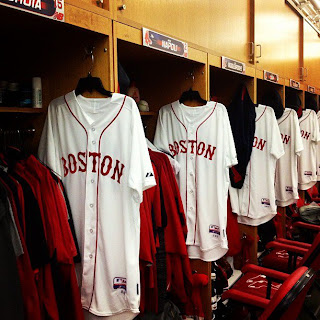 Baseball returns to Fenway on Saturday afternoon, after a harrowing day in Boston when everything was shut down in the hunt for one of the Boston Marathon bombers. (It was eerily similar for me to what happened in New York City on September 11, 2001, when the city here was locked down like Boston was on Friday.)

Thankfully it all ended with the arrest of the suspect, and now baseball will resume on Saturday, in what should be an emotional day at the Fens.

David Ortiz will also make his 2013 debut, as he was activated from the DL for the weekend series with the Royals. Today is also the 101st anniversary of Fenway Park. Today the Sox will wear the special uniforms shown above: home whites with the letters BOSTON on the chest, in honor of the city they play for. Very classy.

Friday's postponed game will be made up with a split doubleheader (naturally, is there any other kind anymore?)  at 1:10 PM and 7:05 PM. (And I won't get to see the second game here in NYC. Thanks always, ESPN.)

A huge thank you to all in law enforcement who put their lives on the line over the past week to catch the terrorists. And please say a prayer for the four people who killed because of these people, those who were injured (many for life), and their loved ones.
Posted by The Omnipotent Q at 11:40 AM