My friend Joe Pickering at King of the Road Music has put together another fine batch of baseball-oriented tunes on his fourth CD called "Baseball Songs: Sports Heroes 4."

It's the fourth in a series of CDs released by King of the Road Music since 2001. I've had the pleasure of listening to them all, and this is another fine collection of baseball songs, dealing with subjects as diverse as Johnny Pesky, the St. Louis Browns, the Chicago Cubs, and Willie Mays. 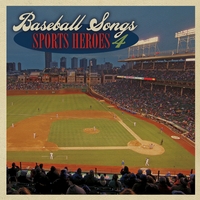 But there is a song called "I'm a Yankee Fan", so you have been warned. (Just kidding.)

To balance that ditty, there is "All I Want For Christmas Is The Yankees To Lose," which to no one surprise, is my favorite song in the collection. The album has a group of various singers, including Phil Coley and Danny Mack, who has been on the other collections.

The CD also includes a few tunes about about America and patriotism. I also liked "Heroes Don't Come Back" very much, which is about those baseball players who went off to fight in World War II and did not return.

There are even two songs about Santa Claus to wrap up the collection, for your Christmas listening pleasure.

Definitely give "Baseball Songs: Sports Heroes 4" a listen. Joe and his crew have done another nice job blending our National Pastime and music.

Here is the video for "All I Want For Christmas Is The Yankees To Lose." Enjoy: