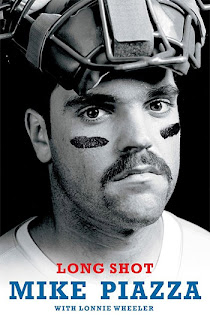 I just completed reading "Long Shot," the autobiography of the life of Mike Piazza, which he co-wrote with author Lonnie Wheeler.

Piazza is remarkably honest and forthright in his book (with plenty of salty language as well), and touches on a various number of subjects that surrounded him. (The book gets the name from the fact that Piazza was a 62nd round pick of the Dodgers, and done more as a favor to Vince, who was close friends with Tommy Lasorda.)

He talks extensively about his family, especially his father, who is clearly the guiding light to his baseball success. He also talks about his dad's relationship with Lasorda, and some of the myths surrounding it, such as the fact that Lasorda was not Mike's godfather.

Piazza's relationship with his first MLB manager is also explored in some depth too, and he is very candid about how it became strained and was never the same once Piazza was dealt to the Mets.

Mike is also very open about his relationship with many ballplayers, especially his best friend in the game, Eric Karros. He is also rather blunt about the Martinez brothers, Pedro and Ramon, who he was teammates with in LA, and with Pedro in New York.They were never pals, and goes into some depth of the problems he had with some other Latin pitchers he played with as well.

And as you would expect, he talks at great length about the dustups he had with Roger Clemens, and Piazza is more baffled by Clemens than anything else. Piazza feels in many that Clemens robbed of the joy of playing in his one and only World Series and looks back at that whole situation with regret.

"Long Shot" is one of the more open and honest books that I have read about an athlete in a long time. Piazza talks at length about his Catholicism, and credits his late mother for instilling that in him. He also talks at great length about how self-absorbed he was during his career, and how he'd wished he'd been more open. But his relationship with the press was never very good, and he thinks that could ultimately hurt his Hall of Fame chances, which are clearly very important to him.

He also talks about how the 9/11 attacks changed him, and the famous home run he hit in the first game back at Shea in September 2001 against the Braves.

He also chats very honestly about the steroid rumors that dogged him later in his career, and swears he has never gone near them. And he touches on the famous gay rumors that got started in the 2000s. Piazza still does have a strong ego, and he is not shy to tell readers why he should be in the Hall of Fame, and lays out all his stats and reasons.

Piazza lets it all hang out in "Long Shot" and if you are a Mets fan or just a baseball fan who likes a compelling story, I would recommend the book.
Posted by The Omnipotent Q at 11:05 AM