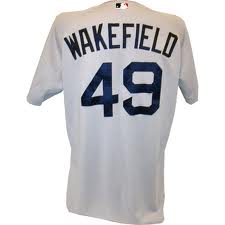 I was watching the end of the Dodgers-Rockies game in Colorado yesterday, and the scoreboard at Coors Field showed something that I was wondering if it could have been a mistake.

For last night's Red Sox-Angels game, they had "49" on the board as the Red Sox starter in Anaheim. Wiat a minute, is Tim Wakefield returning, or is Zach Stewart, just called up for the start, wearing the recently retired Wake's number?

When I put on the coverage of last night's game at 10 PM, I had the Angels feed, and they listed Stewart's number as "49." But then they showed Stewart in the dugout, and he was wearing "47."

I find it curious that both places got that wrong. Could Stewart have first taken 49, but then made a last-minute change to 47?

Anyway, I'm glad that Stewart, who got tattooed for 9 runs in 3 innings (it's no wonder he's been with 4 organizations in 5 years), didn't wear Wake's number. I have been an advocate that 49 should be retired. If not, it's one of those numbers that shouldn't be given out for a long while.

Honestly, how would it look someone wearing 49 the year after classy Timmeh called it quits, while the 21 the Texas Con Man wore still hasn't been worn by anyone since Clemens left in 1996? I know the Red Sox have offered that number to players such as Josh Beckett and Jonathan Papelbon over the years, but no one seems to want to wear it. I've always thought it was the respect Clemens has with many players that no one wants to follow him in it.

Oh by the way, who was the last person with the Red Sox to wear number 47? That would be someone named Terry Francona. You remember him, right?
Posted by The Omnipotent Q at 12:10 PM

You can't retire 49; what happens next time the Sox get a knuckleballer? (They all wear it in honor of Hoyt Wilhelm.)