The Red Sox Traded For This Guy? 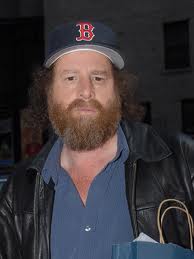 No, not THAT Steven Wright.

The Sox dealt Lars Anderson right at the deadline on Tuesday to the Cleveland Indians for a knuckleball pitcher named Steven Wright. He's a 27-year-old pitcher with a 9-6 record and a 2.49 ERA at Double A Akron.

I'm not sure if the newly-acquired Wright has a thick beard or not.

The Sox did Anderson a favor, as he was stuck behind Adrian Gonzalez and his chances of playing for the Sox in the future didn't appear to be too bright.

Breslow pitched for the Sox in 2006, and with another lefty in the pen, Franklin Morales will likely move to the rotation. Albers was overall decent with the Sox, but Bobby Valentine wasn't using him late in games. Podsednik was back at AAA after coming off the DL recently, and his good numbers while with the Red Sox made him a movable commodity.

I didn't expect the Red Sox do make any major deals, and they didn't. The Breslow trade is a good minor move.

And on the subject of the comedian Steven Wright. He's been at my Trivia Night at Professor Thom's on a couple of occasions. Steven comes into the bar every once in a while to watch  Red Sox games as he's a huge fan and sits at the end of the bar. I remember he once asked me something about one of my Trivia questions.

For the life of me, I can't remember what it was.

But I'm betting he likes the Steven Wright trade.
Posted by The Omnipotent Q at 1:14 AM