Does Bud Believe In The Tooth Fairy As Well? 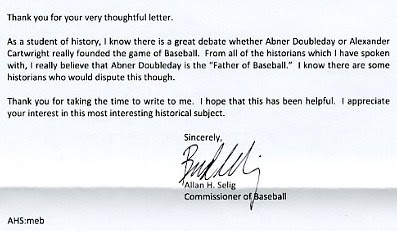 My friend Pete Nash at Hauls of Shame sent me an interesting email the other day, about a letter that Commissioner Bud Selig wrote to an autograph collector named Ron Keurajian, who wrote to him about whether Abner Doubleday or Alexander Cartwright founded the game of baseball.

As you all know, Abner Doubleday founding baseball in Cooperstown, NY in 1839 is a complete fairy tale, made up as the 100th anniversary of the sport was approaching in 1939. Doubleday was a distinguished Civil War general, a man of good character. (One of his descendants, Nelson Doubleday, purchased the Mets with Fred Wilpon in 1980.)

But in this letter (pictured here, courtesy of the Hauls of Shame), Selig says that he really believes that the myth is fact. I can only believe that Selig is continuing to believe a party line is that is clearly wrong, and that few people put any stock into whatsoever.

I think Bud needs to clarify exactly why he thinks the Doubleday fantasy is true.

Here's more on it from Deadspin, Joe Posnanski and the Hauls of Shame web site.
Posted by The Omnipotent Q at 9:42 PM