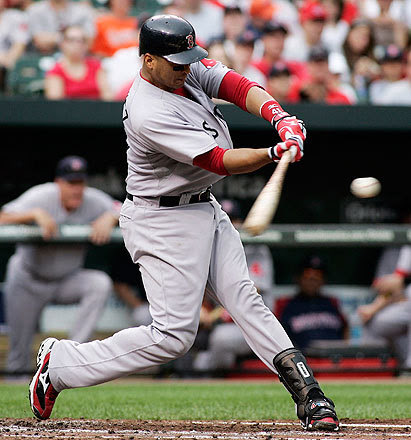 The Red Sox missed getting a sweep over the Orioles over the weekend, as the Birds came back to end their 10-game losing streak and get Juan Samuel his first win as their interim manager, 3-2 in 11 innings.

John Lackey pitched seven good innings, allowing just two runs. He struggled a bit at times, giving up the two runs in the second after Victor Martinez hit a two-run shot in the top of the inning.

The Red Sox left the bases loaded twice, but tied the game in the ninth after Baltimore grabbed the lead in the bottom of the eighth, on Dustin Pedroia's sacrifice fly.

The Orioles won it in the 11th off Hideki Okajima, as Nick Markakis hit a bloop single that scored Cesar Izturis from second base.

The Red Sox are now 4 1/2 games back, as Tampa Bay won in Texas to salvage that series, as did New York, who came from behind to beat the Blue Jays. The Sox trail New York by 2 1/2, as they begin a four-game series in Cleveland tonight with the Indians. Daisuke Matsuzaka takes the hill for the Red Sox.
Posted by The Omnipotent Q at 11:07 AM

Is it me or is John Lackey the picture of mediocrity?

Still a long way to go, though.