Pedroia Kicks Off The Laser Show 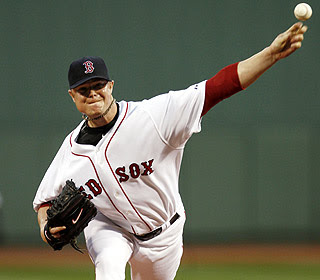 Dustin Pedroia was in a big time slump for a good part of May. But nobody seemed worried about it, as Pedey still was having a great season in the field. There were some rumors about a knee injury, but they proved baseless.

Now, Pedroia is on a tear. He's 10-for-20 and launched a two-run shot that banged into the Monster seats (and came back on the field) to put the Red Sox up, 2-0. (BTW, I also recently finally saw "Avatar." Not bad actually. So why do I mention this in this post? One of the stars was Giovanni Ribisi. Sorry, I still can't look at him and not think of Pedey.)

Jon Lester gave back that 2-0 lead in the second, as he gave up a bomb of a shot to Justin Upton. At times it looked like a struggle for Lester, as he loaded the bases in the fourth with one out, but got out of it with no damage. The Red Sox scored twice in the third, their best inning out of all nine this season. (They've scored 56 runs in that frame.)

Kevin Youkilis hit a two-run shot in the seventh, his 13th home run.

Lester went seven, allowed just four hits and struck out seven. Daniel Bard pitched an efficient eight, but Ramon Ramirez, who always gives me the willies, put on two before Jonathan Papelbon came in with two outs to get the final out and his 15th save.

Tampa Bay and New York both lost, so the Red Sox are now 3 games behind them both. 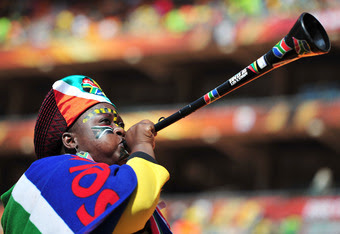 BTW, CBS Sports tonight said that the sound of a vuvuzela was heard at Fenway Park during the game. Could these things make their way out of South Africa and the World Cup and infest sporting events around the world?

I hope not. They make those stupid thundersticks seem tolerable.
Posted by The Omnipotent Q at 11:10 PM