10 Favorite Moments From the 2008 Season 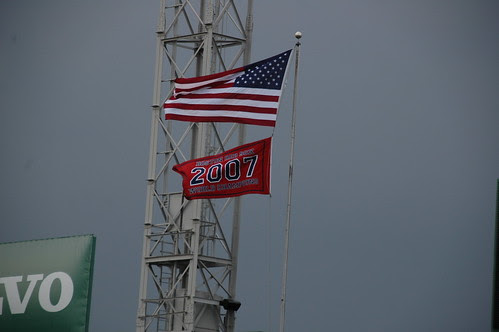 Now that the 2008 baseball season is in the history books, it's time to look back on the year just past. Since I'm one of those people who loves to create lists, I'm going to run down my ten favorite Red Sox moments for the year 2008.

Here they are, in reverse order:

10. April 24. This is a personal one for me. It was my only trip to Fenway in 2008, and it was Justin Masterson's debut. But the really memorable part of this day was I took the Fenway tour, got a chance to walk on the sacred ground of the field, and went into the Green Monster seats and some other sections. I wound up sitting in the new "Coca-Cola" section, and had a great view of the game (except I couldn't see into the left field corner). After the game I got to meet Dennis Eckersley in a postgame reception for the "Blessed! Still We Believe 2" documentary I appeared in.As for the game, Masterson was sensational, allowing just one run and one hit in six innings against the LA Angels. But the bullpen blew it on him, and LA wound up winning, 7-6, despite a David Ortiz ninth-inning homer.

9. Manny Ramirez hits home run number 500. Manny (you remember him?) blasted HR #500 in Baltimore and became the 24th player in history to reach that coveted mark. It was a game that became better remembered later in the year as the game that David Ortiz hurt his wrist on a pretty inocuous swing in the ninth inning, and wound up missing seven weeks.

8. AL Wild Card clincher. I felt a great sense of relief when the Sox clinched the Wild Card on September 24 at Fenway against the Indians, and did it in style, coming from behind to beat the pitcher who is a shoo-in for the AL Cy Young Award, Cliff Lee, 5-4. It was just Lee's third loss of 2008.

7. Fight Night at Fenway. On June 5, the Red Sox had a dustup the night before with the Tampa Bay Rays at Fenway, as a number of players felt that a slide by Coco Crisp into second on a steal attempt was too high and they started jawing with him when he got back to the dugout. The next night you could feel the tension in the air, and when Crisp came up in the second inning, James Shields immediately pluncked him, and it set off a bench-clearing brawl. A few Rays players, like Akinori Iwamura and Carl Crawford, especially went after him after he was down in the pile and were suspended for it.

6. Johnny Pesky's number 6 retired. I always feared the Red Sox would do it after he passed away, but they had the good sense to honor "Mr. Red Sox" and retire his number while he could enjoy it. It was retired for Johnny's longtime service to the team, as they waived some of those silly rules about which numbers can be retired. At least Bill Buckner can now also say his number was retired, too.

5. Opening win in Japan. The Red Sox opened 2008 with two games against Oakland in Tokyo in March, and they opened with a win in extra innings, 6-5, on Brandon Moss' home run. It was truly bizarre getting into Professor Thom's at 5 AM to watch a baseball game (and a good crowd turned up for it), and not more than 30 seconds after I got there, a radio reporter came up and interviewed me about it. Even at that hour, the press doesn't leave me alone.

4. Jason Bay scores the run to win the ALDS. It was another moment of great relief to see the Red Sox wrap up the ALDS against the Angels when they did, as LA was gaining momentum, winning Game 3 in extra innings and about to take the lead in the ninth of Game 4 (until that botched suicide squeeze changed everything). Jed Lowrie's single in the bottom of the inning gave the Sox a date with Tampa Bay in the ALCS.

3. The ring and flag ceremony. For the second time in four years, the Red Sox gave out World Series championship rings and unfurled a championship banner before a sellout Opening Day crowd. It didn't have the same raw emotion of April 2005, but it was sweet to see it happen again. The sweetest moment of the day was the reception Bill Buckner got from the fans as he threw out the first ball, and how moved he was by the applause. And the Red Sox further celebrated with a 5-0 win over Detroit.

2. Kevin Youkilis scores the winning run in ALCS Game 5. It was the most improbable single-game comeback in Red Sox history, and the second biggest in postseason history. The Sox were seven outs away from elimination and down 7-0. And the Ghosts of Comebacks Past popped up, as the home team scored four in the 7th, three in the 8th, and won it in the ninth on J.D. Drew's ground-rule double. It just the fifth time in the Red Sox' 108-year history that they came from 7 runs down to win any game. And the celebration at Thom's afterwards brought back sweet memories of the previous October.

1. Jon Lester's no-hitter in May. Lester continued his Hollywood comeback from lymphoma with a no-hitter against the Kansas City Royals, 7-0, at Fenway. He also took the next step in his maturity as a top-notch starter and one of the best left-handed pitchers in baseball. But the most memorable moment of the night was afterwards, when he was seen hugging Terry Francona. It brought a tear to my eye, and just about everyone else who witnessed it.

There were a few other memorable moments as well, like the 456th sellout in September, J.D. Drew winning the All-Star Game MVP, the Ramirez trade and its immediate aftermath, and the August 12th 19-17 game at Fenway against Texas.

Anyone else notice that not one of these moments involved The Evil Empire in 2008?
Posted by The Omnipotent Q at 11:41 AM

Lots of fabulous moments in 2008. Too bad it didn't end with another title.