Papelbon Returns To The Pen 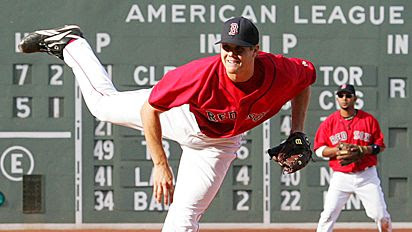 In a stunning turn of events this past week, the Red Sox announced that Jonathan Papelbon would return to the bullpen for the 2007 season, instead of going into the starting rotation as originally planned.

Everyone seemed to have an opinion on the subject, one way or the other. Papelbon said he would make the move back to the pen for the good of the team, and they really seemed to need him out there.

Mike Timlin will open the season on the DL, and the Sox brass are simply not convinced that Joel Pineiro is the answer at closer. They weren't convinced that Julian Tavarez or Brendan Donnelly is also. They looked into possible trades for closers like Brad Lidge and Chad Cordero, but either the asking price was too high or they weren't available.

Papelbon was shut down early last September because of shoulder problems. He was simply overworked last year with all the innings and back-to-back appearances he made. He was spectacular the first half of the year (and perhaps the AL MVP for that time), but he was clearly running down as the season went on, as he blew six saves in the second half.

Originally the medical staff believed that moving Papelbon to rotation would benefit him in the long run, as he would go on a regular throwing regimen. But he has long said that he enjoys the 9th inning role (and I met his mother last year and she told me the same thing) immensely. I believe the Red Sox feel that they can put Julian Tavarez into the number five starter role until Jon Lester is ready to come up, as he will most likely start the season at Pawtucket. (Lester has pitched well this spring but could use some additional time at AAA.) The closer role was a huge, wide open gap for the Sox, and putting Papelbon back is a huge boost for them.

But they must be careful with him. He probably will not be used in consecutive games unless it is absolutely necessary, and he will not pitch many multiple-inning appearances as he had in 2006. I'm sure that Terry Francona will use him properly. He's too valuable a property to go messing with his future.

I really hope Papelbon staying in the closer role helps the Red Sox in 2007, but more importantly, I hope that Jonathan's not putting his future in jeopardy by remaining in the role.
Posted by The Omnipotent Q at 7:03 PM

No Surprise really. The other candidates DID NOT inspire confidence at all!!

Last September Paps had a shoulder subluxation (where the shoulder pops out of joint-ewww) so there was little choice.

Ah let's face it we all knew this was coming. I think the Sox were just being fair, taking a look at other possibilities such as Pineiro, Timlin et al. Papelbon was always going to be the correct answer to this question though.

I tend to agree. They made some last-ditch efforts to get another closer, but I think the ultimate fallback plan was Papelbon. My fingers are crossed that he stays healthy.

Hey John- are you going to Philly on the Thom's bus on Saturday? I'm coming up from VA for the game- I left Leggett and FiNY messages cuz I think they're both going- we should all meet up for a brew at the park...email me at mattysox9@yahoo.com- maybe we can all coordinate something...take care!

Hey Matty: I'll drop you a personal email about Saturday...