The Era Of Dice Begins 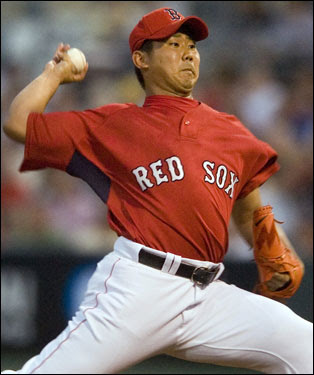 Daisuke Matsuzaka made his Red Sox debut on Friday night in an exhibition game against the Boston College Eagles before a soldout crowd at Ft. Myers, and the Sox went on to a 9-1 win.

There was also a good crowd watching at Professor Thom's to see the Japanese phenom make his debut. NESN showed the first three innings of the game, and it brought out a number of fans for the 6:05 PM start. There was a definite "Japanese" feel to the bar, as Asahi beer was featured, along with free shrimp chips and shots of sake. (Of which I partook in. Not bad to be honest.)

Dice gave up a double to BC outfielder Johnny Ayers on his very first pitch, but left him at third to end the inning. He pitched two innings, threw 25 pitches, 19 for strikes. He was impressive, even if it was just against college competition. He mixed his pitches well, and seemed to be enjoying it, especially after he retired to the dugout for the night.

The Dice-K Era has officially begun. He will face major league competition for the first time on Tuesday afternoon against the Florida Marlins in Jupiter.

Posted by The Omnipotent Q at 9:37 PM