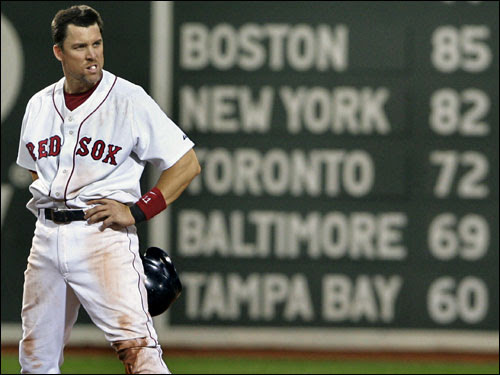 This is the fifth article I have written for the "Top 100 Red Sox" web site, which is a series of profiles of the 100 greatest players in Red Sox history. Please check out the site: http://top100redsox.blogspot.com. This profile is of 2004 postseason hero, Bill Mueller.

He was a ballplayer who never brought attention to himself. He was a classy player, who played the game the right way. He was quiet in the clubhouse, and a very religious, family man from Missouri.

Bill Mueller will be remembered forever by Red Sox fans for two at-bats that changed the course of the Boston Red Sox franchise. They were two of the biggest clutch hits in team history, and they came against the same club, in the same season, and against one of the greatest relief pitchers in baseball history.

William Richard Mueller was born on March 17, 1971 in Maryland Heights, Missouri. His last name has an unusual pronounciation. Usually prounounced "muhl-er" or "meuh-ler", his grandfather changed the pronounciation to "mil-ler" when he immigrated to the United States from Germany shortly before World War II began, so it would sound more "American." (For some reason, he did not change the spelling.) Bill attended DeSmet Jesuit High School, and Southwest Missouri State University before he was drafted by the San Francisco Giants in the 15th round of the 1993 amateur draft.

He made his major league debut at Candlestick Park in 1996. He split that season between AAA Phoenix and San Francisco, playing in 55 games and batting .330, mostly at third base. The next season, he became the regular third baseman, hitting .292 in 128 games. He hit just 7 home runs, but showed a superior glove in the field.

Mueller remained in San Francisco through 2000. He didn't put up any eye-popping numbers, but continued his tremendous fielding at third, and occasionally filling in at second. He was traded in December 2000 to the Chicago Cubs for relief pitcher Tim Worrell. At Wrigley Field, he was slotted in as the everyday third baseman. In May, at a game at Wrigley, Mueller was chasing a foul pop as it heading toward the stands when he ran directly into the brick wall, badly injuring his right knee and ending his season. Knee injuries would be a career-long problem for Mueller, but he made it back for the 2002 season. In September of that season, he was traded back to the San Francisco Giants, who were in the stretch run in an effort to win the NL West title. The Giants went all the way to the seventh game of the World Series in 2002, but Mueller only saw action in the NLDS, and was left off both the NLCS and World Series rosters.

Mueller was a free agent after 2002, and on January 10, 2003, he signed with the Red Sox. It certainly wasn't a move that made headlines, and most Sox fans had barely heard of him.

Mueller opened the 2003 season as a platoon player, splitting time with Shea Hillenbrand at third. But a trade that occurred on May 29 would alter not only Mueller's future, but the destiny of the Boston Red Sox franchise. Hillenbrand was traded to the Arizona Diamondbacks for righty closer Byung-Hyun Kim. The Sox had tried a closer-by-committee bullpen, but it was a failure, and the Sox desperately needed a big-time closer. They found it in Kim, but it also made Bill Mueller a full-time third baseman. (And oh yes, it made another part-time player a full-time designated hitter: David Ortiz.)

With that, Mueller flourished at third base, and at the plate. He showed off his flashy glove and that impressed Red Sox Nation. But he had a career year at the plate, hitting a high of 19 home runs, 85 RBI and incredibly, winning the AL batting title with a .326 average, edging out teammate Manny Ramirez on the final day of the regular season. What made it all the more incredible was the fact that Mueller usually batted in the eighth and ninth spot in the batting order, as the Sox had one of the most potent lineups in baseball history in 2003.

Mueller also made baseball history that year as well. On July 29 in a game at Texas, Mueller hit two grand slams (and in consecutive at-bats), and became the first player ever to hit one from each side of the plate. The Red Sox won that night, 14-7, and Mueller added a solo homer as well, hitting three HRs for the only time in his career and driving in nine runs total. As great a season as Mueller had in 2003, it is his heroics in 2004 that he will forever be remembered.

In 2004, Mueller had another solid, dependable season, but did spend some time on the disabled list with the recurring knee problems. In 110 games, he hit .283 with 12 HRs and 57 RBI. But on July 24, the Red Sox found themselves in a dire position as far as their 2004 season went. They were a stagnant club, and the Yankees were pulling away in the AL East. New York was in town, and they had won the previous night. The next day featured a high-scoring game that included the now-legendary home plate dustup between Alex Rodriguez and Jason Varitek that led to a bench-clearing brawl. By the ninth inning, the Sox were down by two with Mariano Rivera trying to close it out. The Red Sox got a run with one out and a man on. And up to the plate stepped Bill Mueller.

Mueller hit a Rivera fastball high into the bullpen in right field to send Fenway into a total frenzy and give the Sox an emotional come-from-behind victory. (It is mistakingly believed to have been the turnaround of the season. That actually didn't happen until mid-August. But it certainly is the "symbolic" turnaround point of the 2004 season.)

The Red Sox got hot later in the season to wrap up a Wild Card spot. Mueller and the Sox made it to another showdown with the Yankees in the ALCS. They quickly fell behind 3-0 in the series and it seemed like it was all over but the shouting. In Game 4, the Red Sox were down to their final three outs in the ninth when Bill Mueller came up in another huge situation. Dave Roberts was the tying run on second with no outs. On a 1-1 pitch, Mueller lined a Rivera pitch up the middle to score Roberts and tie up the game. Once again, Mueller had another clutch at-bat against the so-called greatest closer in history. And he came up big again.

And it was the start of the greatest comeback in the history of postseason baseball.

Eight wins later, the Red Sox were the Champions of the World and Bill Mueller had his first World Series ring, and a place in the heart of every Red Sox fan on the planet.Mueller had another dependable season at the third for the Sox in 2005, hitting .295 with 10 homers. But he was a free agent after that season, and the Red Sox elected not to re-sign the popular third baseman, who turned 35 the next March. He wound up signing with the Los Angeles Dodgers. He played just 32 games in 2006, when his chronically bad knee acted up again. He was forced to have a third surgery on it, and this one would be a career-ending one. Doctors said the deteriorating condition in the knee ruled out all known procedures to repair it.

So after the 2006 season, Bill Mueller officially retired and was named special assistant to Dodgers' General Manager Ned Colletti.

It was a sad end to a career of such a classy ballplayer as Bill Mueller. He will always be remembered by Red Sox fans everywhere as the consummate professional, a guy who did his job with all of his talent, with a lot of heart, and without any complaint.

John Quinn is a writer who lives in New York City and runs the web site, "The Mighty Quinn Media Machine," and writes for the Red Sox fan site, Bornintoit.com, as "Brooklyn Sox Fan."
Posted by The Omnipotent Q at 11:58 PM

Where, Oh where have my "Idiots" gone?

Forget Juan Damon, for he's lost to me;

So has Bill Mueller;

& the Clown Prince, Millar, is in the Land of The Lost, Baltimore;