"Impossible To Forget: Summer Of '67" 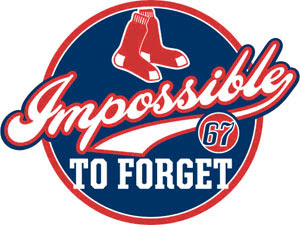 I was watching the Red Sox game on NESN when I saw a small advertisement for a documentary to be aired on March 30th called, "Impossible To Forget: Summer of '67," about the 1967 Impossible Dream Red Sox team. I write this for a special reason.

I was interviewed for this documentary back in February.

Brett Rapkin, who made the excellent Bill Lee documentary, "Spaceman: A Baseball Odyssey," was asked by the Red Sox to make a documentary about the 40th anniversary of the 1967 Red Sox team that shocked the baseball world and won the AL pennant that year. My buddy Chris asked me if I'd like to be a part of it back in January, and I agreed.

I spent an afternoon in Februaury being interviewed about the team, Boston baseball and how they pulled it off. I was really honored to take part in it. The interview went great, but because of some problems with the lighting, I had to do it without my glasses. It should be interesting to see how I look on film without them. (And of course, I certainly hope I made the final cut!)

NESN will be debuting the film on March 30th at 8:30 PM and replayed again the next afternoon at 4 PM. Here is the lowdown on the documentary from NESN's web site:
http://www.boston.com/sports/nesn/aboutus/news/02_13_07/
Posted by The Omnipotent Q at 11:24 PM

How will those of us outside of New England see this program? I was 15 years old at the time; a Red Sox fan whose New England family had been transported to northern New Jersey. After Lonnie's game on the last day of the season, I was reduced to sitting by a radio waiting for the WINS sports reports at :15 and :45 past the hour and, of course, they did not care about the California game as much as I did and their reports were slow in coming. Eventually I got the news, of course: until then the greatest day of my sportsfan life.

Unfortunately, tonight I couldn't see the film as it was blacked out on NESN by DirecTV. I would guess in California, you could only see it on DirecTV as I don't know if they will black it out there.

I heard it came out very well, and it should be available on DVD in May if you don't get a chance to see it on TV.

Thanks for sharing those nice memories, Barth...