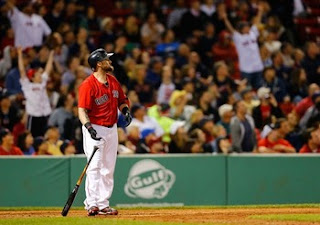 Here's some of the good stuff that happened to the Red Sox on Tuesday:

Felix Doubront pitched probably his best game ever in a Red Sox uniform, going 8 innings and allowing just three hits and no walks. He retired the last 17 hitters he faced. Like to see more of this Doubront in the future.

Jonny Gomes got another clutch hit: a two-run game-winning home run in the bottom of the ninth to win Game 2.

Alfredo Aceves was good yet again, going five innings and allowing just one run before the rain showed up in Game 1. And he earned another ticket on the Pawtucket shuttle after the game.

Jose Iglesias just keeps on hitting. His current streak is at 18 games, the longest in MLB right now. He's hitting an amazing .435, in just 92 at-bats.

And some not so good:

Andrew Bailey coughed up another one, giving up a game-tying HR to Kelly Johnson in the ninth on his second pitch. He took away what should have been a well-earned win for Felix Doubront, and got the vulture win on Gomes' home run. Bailey continues to be a monumental disappointment.

Both Clay Buchholz and David Ross were put on the DL. Buchholz may not be on long, as he last pitched on June 7th. But Ross was placed on the 7 day concussion DL, as he has another recurrence of the concussion symptoms. Ryan Larvarnway was brought back up.
Posted by The Omnipotent Q at 11:53 AM