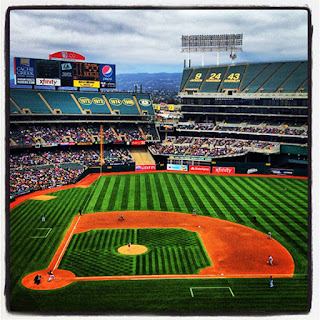 I recently came across an interesting photo book of baseball, and it is not your usual picture book.

Brad Mangin is a baseball photographer, and he spent the entire 2012 MLB season taking pictures around the game. But with modern technology, he did something very different. He took a season's worth of pictures using an Apple iPhone 4.

It is probably the first "instagram" book of baseball. And it's called "Instant Baseball: The Baseball Instagrams of Brad Mangin."

And he's taken some amazing shots, over 240 in all. He began in spring training, and went all the way to the San Francisco Giants World Series victory parade. he's taken photos of everything imaginable around the game (although the majority of his shots were taken at AT&T Park and the Oakland Coliseum, as he is based in the Bay Area): rain delays, victory celebrations, batters in the on deck circle, fans in the stands, superstars as well as fringe players, and players waiting for the game to start.

Mr. Mangin has put together a terrific baseball book based on the technology of today. Whether you are a shutterbug, a baseball fan, or a shutterbug who likes baseball, I'm sure you like Mr. Mangin's effort.
Posted by The Omnipotent Q at 12:05 PM