Have To Wake Up Bat 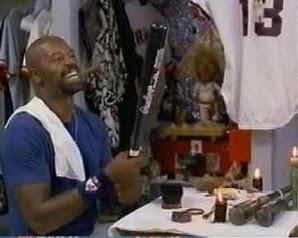 It's been a tough week for the Red Sox so far. They've lost 3 of the last 4, and the bats have gone rather silent since the 14-inning game at St. Pete last Monday.

They've had the number one offense in the AL in June, leading in batting average, among other categories. But they've scored just 9 runs over the last four games.

This isn't the kind of game that worries me much. The good thing was the performance of Ryan Dempster, who went 7 2/3 innings, allowing just 2 runs. It was exactly what the overworked pen needed last night.

The loss cut the Sox lead over Baltimore to 1 1/2 games in the AL East. The Orioles have been a real thorn in the Sox' side in recent years: Baltimore has won 17 of the last 23 meetings with the Sox, going back to the beginning of 2012.

Yes, the bats need to wake up. Is Pedro Cerrano (or Jobu) available?
Posted by The Omnipotent Q at 11:53 AM