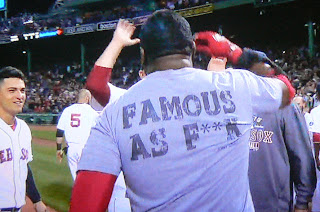 You want to intentionally walk Dustin Pedroia in front of David Ortiz in a tie game in the ninth inning? You pay the piper, Ron Washington.

And he did as Big Papi sent a line shot into the Texas bullpen to give the Red Sox a 6-3 win. It was the 10th time in his Red Sox career he has won a game in the bottom of the ninth or later at Fenway with a home run.

It was a frustrating night for the first eight innings, as the Red Sox left runners everywhere. It looked like another one-run loss was looming, until the Sox tied it in the 7th, as Mike Napoli beat out a DP ball at first with the bases loaded. Jacoby Ellsbury and Jonny Gomes both had 4 hits. (Gomes hit the first pitch of the ninth inning to start the finish.)

Jon Lester struggled again, going six innings and allowed all three Texas runs. The pen was stellar again, shutting the Rangers out the rest of the way before Papi's heroics gave the Sox the series win.

My buddy Jere over at A Red Sox Fan From Pinstripe Territory has an interesting clip on his blog about the misuse of the word "walkoff" (which I have never liked) from last night's game. (And thanks to him for the use of his pic of Papi and his "Famous" shirt.)
Posted by The Omnipotent Q at 10:52 AM