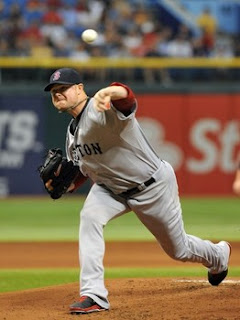 Jon Lester continued his struggles last night at St. Pete, as he got hit for 7 runs in less than five innings as Tampa Bay evened their series with the Sox, 8-3.

On a night when the Red Sox needed a lot of innings out of Lester, they didn't get it. (I'm still trying to figure out how they won that insane game on Monday night.) Lester has now given up four or more runs in 4 of his last 5 starts, losing three and getting two no-decisions. Command seems to be a big problem, as he's walked 18 in those last five starts, including a whopping 7 last night.

The best part about last night was the work of Jose De La Torre, who was brought up from Pawtucket when Clayton Mortensen went on the DL with a hip injury. The rookie saved the bullpen, as he went 3 1/3 innings and allowed just one run. The Sox don't have another off day until Monday, so the pen needed a day off after the marathon on Monday.

De La Torre returns to Pawtucket today, and the three-ring circus known as Alfredo Aceves comes up to make the start in tonight's finale in St. Pete.