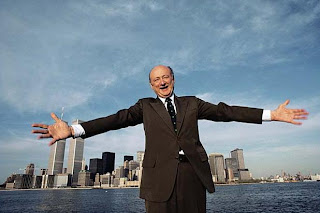 I was saddened to learn that Ed Koch died this morning at the age of 88. He was New York's mayor from 1978-1990, and came along at a time when the city really needed him.

New York was badass territory in the mid-1970s, and the city teetered on bankruptcy. Koch ran for mayor in 1977 and won, over Mario Cuomo. New York had become a national joke, with crime at astronomically bad levels and people fleeing the city at record rates.

Koch's twelve years so a change in the city's fortunes. The city rose from the ashes like a phoenix. But there was also a downside, with corruption among his political allies, the explosion of AIDS and racial tensions, and a spike in the murder rate late in his tenure. He was mayor for three terms, and was defeated for a fourth in 1989 by David Dinkins.

His trademark phrase was "How'm I doin'?" I remember in the early 1980s, he came unannounced to a street fair in my neighborhood and walked up the avenue like a conquering hero. I got to shake his hand and it was a big deal in the area he was here.

And after he was mayor, I also remember he was always in the front row of the Midnight Mass at St. Patrick's Cathedral on Christmas Eve. It is a tradition that mayor attends it, even if he is not Catholic. Koch was Jewish, and he said he always enjoyed it so much as mayor that he kept coming back every Christmas Eve after he left office.

He had not been in good health in recent years. A documentary called "Koch" is coming out, and he was too ill to attend a premier of it this past week.

If you looked up "New Yorker" in the dictionary, you'd see Ed Koch's picture. He made it cool to be a New Yorker again, and I thank him for coming along at a time the city was in such desperate straits.

Godspeed Mr. Mayor. You did very well, indeed.
Posted by The Omnipotent Q at 11:35 AM