Now Back To The Business of Baseball 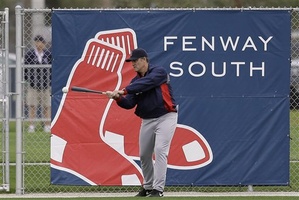 As many of you well know, the last two weeks have been pretty hectic for me. We changed Trivia venues, something that was coming for a while. The lack of respect me and my Trivia regulars got at the "Old Place" led us to move to The Mad Hatter on 3rd Avenue and 26th Street, and we had a wonderful Opening Night there last Tuesday.

While all of this was going on, the Red Sox opened their camp to pitchers and catchers last Tuesday, and to the full squad last Friday. It's always a beautiful thing to see the baseball season on the horizon, as it takes my mind away from the winter, which hasn't been terribly mild so far this year.

Also, it puts the disaster of 2012 that much further into the rear view mirror. I am rather optimistic about the 2013 Red Sox, as I see the AL East as a division just about anyone can win. I don't see anyone as a sure-fire favorite, and I am betting most so-called "experts" will be putting the Sox as finishing in either fourth or fifth. I'm fine with that, as the Red Sox have a lot to prove, and not just to the experts but their loyal fans as well.

So how optimistic am I? I'm even willing to give John Lackey a chance. I heard he has slimmed down considerably, and the year off should help him. (Is getting 12 wins from him asking too much?)

Anyway, the exhibition season opens this Thursday, with the traditional doubleheader against the college teams, Northeastern and Boston College, The Sox will open Saturday against MLB competition, with a 1;35 PM game against Tampa Bay at Ft. Myers.

Like I did last year, I will not be discussing every game any more. I hope you enjoy what I do write about this upcoming season, and look forward to writing more about baseball and less about nonsensical soap opera stuff that dominated 2012. Bring on the 2013 Grapefruit season!
Posted by The Omnipotent Q at 8:54 PM