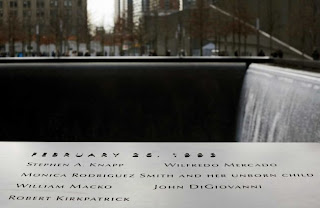 It was 20 years ago today that a 1,200 pound bomb exploded under the North Tower of the World Trade Center, killing six people and injuring 1,000.

And all these years later, it has become known as the first World Trade Center bombing, and almost overlooked after what happened 8 1/2 years later.

I was working in Greenwich Village that day, and at lunch time that day I saw smoke in the sky and the sounds of fire engines and ambulances in the distance. I knew something was terribly wrong, and went back to my office and heard about the bombing.

I worked for a company called TRIP (which was connected to the Tower Records chain), and one of my colleagues was my dear friend Joyce, who would be lost in the second attack on the World Trade Center.

Please say a prayer for the families and loved ones lost 20 year ago today, and also for those lost on September 11, 2001. They're always in my thoughts and prayers.
Posted by The Omnipotent Q at 11:38 AM