A New Chapter Begins For Trivia Night On Tuesday 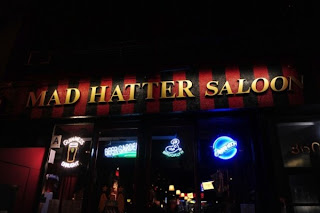 Tuesday Night Trivia will make its debut tomorrow night at The Mad Hatter on 3rd Avenue, and I'm really excited about this new chapter in the history of my Trivia Night. It will be happening at 8 PM each Tuesday night. (And there will be no delays every week due to the whims of one bartender.) It will be the same Trivia Night that all of you know have come to know and love over the years. It will be five categories, with Current Events, General Knowledge and IQ Trivia the three staple categories, and the two Special Categories as well. The only difference will be the earlier starting time and the new and better venue!

We will be doing the same Trivia that we would have done last week. The Special Category will be "Civil War Trivia", seven questions about that 19th century conflict in honor of Abraham Lincoln's 204th birthday on Tuesday.

The Q Train lightning round will be "Best Album Grammy Winners Trivia", in honor of last night's Grammy Awards. I will give you the names of ten famous pop music acts and you have to tell me if they won the Best Album Grammy once, more than once or never.

The Sneak Peek question for this week is:
"The movie 'The Sound of Music' takes place in what country?"

We get the festivities going at 8 PM on Tuesday. Once again, I thank all of you for the heartfelt messages after my departure from the other place, and I hope to see many of at The Mad Hatter on Tuesday night. It is located at 360 3rd Avenue, between E.26th and 27th Streets. I hope many of you can make it out, and we can get the new Trivia Night off to a flying start!
Posted by The Omnipotent Q at 11:00 AM