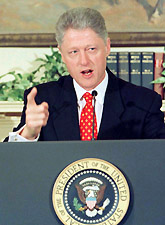 Tuesday Night Trivia at The Mad Hatter this week will feature "1990s Trivia," seven questions about the last decade of the 20th century, mostly in pop culture. (Not counting 2000, of course, as it was the final year of the 20th century but won't be part of this quiz. You all do know that the 21st century began in 2001, right?)

The Sneak Peek question for this week is:
"What river forms a border between Texas and Mexico?"

We get going at 8 PM on Tuesday. Thanks to all of you who called ahead to book tables last week. If you could continue to do that, the staff at The Mad Hatter would really appreciate it. The Mad Hatter's phone number is: 212-696-2122, and please call anytime on Tuesday. The last two weeks at our new location has been so much fun, and I hope many of you can come out tomorrow night to keep it going!
Posted by The Omnipotent Q at 12:03 PM