The Gift That Keeps On Giving 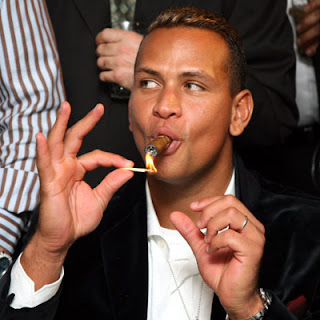 Alex Rodriguez was one of a number of MLB players named in a report about a clinic in South Florida (an anti-aging one) who supplied them with PEDs.

Yep, Slappy was named as a PED user in 2009 and was raked over the coals. You'd think this guy would have learned his lesson. But noooooo.....

There is speculation that the Yankees may attempt to void the remainder of Rodriguez' contract, which has five more years and something like $114 million to run on it. That will simply never happen. The players union will fight it tooth and nail, and no team has ever attempted to void a deal of someone either suspected or caught using PEDs.

The Yankees are simply stuck with him until 2017. The contract they re-signed him to after he opted out in 2007 will go down as the worst in baseball history. Exactly who were they bidding against after he opted out? I recall NO ONE else offering him a better contract (or even one close to what the Yankees offered) than 10 years and $300 million.

I'm on an email list with a number of friends of mine who are Red Sox fans, and we all breathe a sigh of relief every time Slappy gets into a mess of his own making that he never put on a Red Sox uniform. And we all collectively hope the Yankees don't succeed in voiding the rest of his contract.

My friend Lisa Swan at Subway Squawkers has a good column today about the latest A-Rod mess.
Posted by The Omnipotent Q at 11:42 AM