"World On A String: A Musical Memoir" 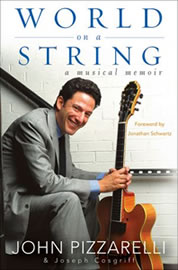 Recently I finished reading a very entertaining book called "World on a String: A Musical Memoir" by the great jazz guitarist John Pizzarelli.

I will say as a matter of disclosure that John and I have become friends through our mutual love of the Red Sox and meeting through The BLOHARDS group. So I guess I'm biased. So be it.

John co-wrote the book with our mutual friend Joe Cosgriff, and if you like the American Songbook, you are sure to like the book. John not only talks about his life with his father, the legendary jazz guitarist Bucky Pizzarelli, but his early life being around other jazz greats and his first forays into playing music in his native New Jersey, which I found very entertaining.

John dedicates chapters to such stars he played with like Rosemary Clooney and Frank Sinatra, and also about playing with such musical icons as Benny Goodman, James Taylor and Paul McCartney.

Of course, I had to smile at some of the Red Sox references, and also a few "Odd Couple" ones as well. As John said to me, "Expect that when writing a book with Joe Cosgriff."

John talks extensively about his life on the road as a touring musician, and also a very interesting chapter about his time on Broadway.

For those of you in New York, John will be doing an in-store appearance at Barnes & Noble store at 82nd Street & Broadway this coming Monday night, January 14th at 7 PM. He will be signing his new book, chatting with New York 1's Budd Mishkin, as well as playing some tunes. I'm hoping to be there but I will be working on Monday.

Anyway, I highly recommend John's book. A great behind the scenes look at a really nice guy's musical life.
Posted by The Omnipotent Q at 11:40 AM