Very Proud Of My Boys Tonight 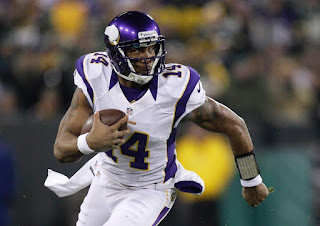 Cancel any ticket plans you had for Atlanta next weekend.

The Vikings went out of the playoffs, 24-10, tonight in Green Bay.

Christian Ponder was a late scratch at QB, as the elbow he injured in the season finale last Sunday made it impossible to play tonight, so Joe Webb (pictured) came on in his place. It was the first time a QB who did not start a game in the regular season started a playoff game since 1992 (Frank Reich of Buffalo in the great comeback game against Houston), and the first time since 1950 that a QB started a playoff game in which he did not attempt a pass in the regular season. (Webb took three snaps against Tennessee in garbage time.)

The deck was stacked against Webb, and he sure looked overmatched.

Another Vikings season ends without a championship. But tonight I am not upset but just a bit disappointed. I guess I started dreaming about the Vikings going on a Wild Card postseason run like the Giants did last year. But when I heard Ponder was out, I knew it was not meant to be. Joe Webb did his best, and I certainly can't blame him.

Before the first game on September 9th, I hoped that the Vikings could go 8-8 and move up in the NFC North. They had two lousy years in a row, and I was optimistic after the good draft that they had. I really never thought the playoffs were a realistic possibility four months ago. But the great run they had in December made that a reality.

Adrian Peterson was otherworldly. The Vikings defense was better than advertised, and rookie Harrison Smith was outstanding in the secondary.. Blair Walsh became the best kicker in the NFL as a rookie. Leslie Frazier did a terrific job in just his second full year as Vikings head coach.

I feel like the Vikings have a bright future in front of them. Hopefully they can take the next step and win the North in 2013.

I thank each and every one of them for a great year. I'm really proud of my team, and wish them a good offseason. Skol Vikings!
Posted by The Omnipotent Q at 11:59 PM